Michael Mello's response to Dr. Thomas Johnson's belief that The Bullet is no an example of a free press. He believes it to be censored by the Board of Publications.

Dr. Thomas Johnson’s reiteration of his belief that THE BULLET is “anything but an example of a free press” deserves comment. His letter of January 31 makes essentially two assertions: first, that the administration, through the Board of Publications, censors THE BULLET; second, that the MWC newspaper should correct this situation by declaring its financial independence by refusing to accept any of the student activity fee and funding itself solely by advertising. This first view is patently untrue, and the second is unrealistic.

Dr. Johnson does not seem to understand the role and purpose of the MWC Board of Publications. First, the Board is neither a “school administrative body” nor an “official element of the administration,” as Dr. Johnson would have us believe. The Board is composed of 15 members: the editors, business managers and the advisors of THE BULLET, BATTLEFIELD, and AUBADE, the SA Vice President, two students and one faculty member-at-large, the Comptroller, and the Director of Information Services. As a simple head count will reveal, nine members of the Board are students, three are members of the faculty, one is the editor of The Free Lance-Star and only two are members of the administration. Since most decisions of the Board require no more than a simple majority, it is clear that the Board is not a “school administrative body.”

Secondly, Dr. Johnson seems to be under the mistaken impression that the Board of Publication grants THE BULLET its funding. The Board only recommends a proposed budget for the newspaper to the SA Senate Finance Committee; it is Finance, not the Board of Publications, that decides what portion of the student activities fee THE BULLET will receive each year. Needless to say, the Senate Finance Committee is composed exclusively of students and is presided over a chairman who is elected by the campus-at-large.

Thirdly, Dr. Johnson is wrong to claim that THE BULLET is “censored” by the Publication Board. On the contrary, The Handbook comes closer to the truth when it states that the Board “guarantees editorial freedom for the student publications to maintain their integrity of purpose as vehicles for free inquiry and free expression.” The Board meets infrequently and never sees the layout of the BULLET prior to publication. Its Constitution does not grant it the power to veto any piece of copy for any reason. How then, may it censor?

Dr. Johnson suggests that THE BULLET will never be a free press until it gains its revenue solely from “advertisers, purchasers or contributors.” As an example of such a “free press,” Dr. Johnson cites PROMETHEUS, which receives no MWC funding at all. If Prometheus can do it, then why can’t THE BULLET, asks Dr. Johnson. The absurdity of this question is underscored by a brief comparison of the two publications. PROMETHEUS prints every two weeks; the Bullet goes to press weekly. PROMETHUES prints 500 copies per issue; THE BULLET prints 3000. A standard 12-page issue of PROMETHUES costs $100; a four page BULLET costs $316; a six-page paper costs $473; an eight-page paper costs $580; a ten-page paper costs $770. One page of PROMETHEUS is 7” x 8 ½” as compared to the BULLET’S 15” x 22 ½”. In other words, an entire 12-page issue of PROMETHEUS would almost fit on two pages of the BULLET.

As Fate would have it, the BULLET is presently an example of a free press, even by Dr. Johnson’s strict definition. Due to the incompetence of THE BULLET’S former business manager, the paper has completely exhausted its Finance Committee allotment for the year and is now being supported solely by advertising revenue. An intensive ad campaign has increased advertising revenue by 700 percent since the beginning of the semester (from six ads per issue to 42. But even with this intensive effort, the BULLET still had a $140 deficit for last week’s issue. There is no stronger testimony to the absurdity of Dr. Johnson’s position that THE BULLET should finance itself solely by “advertisers, purchasers or contributors.” Once again, Dr. Johnson idealism has blinded him to the real world.

Dr. Johnson claims that the administration censors our campus newspaper. But if this is true, then how does THE BULLET manage to print such pieces as “Blame Enough For All” in the November 11, 1977 issue. Helen McFalls’ December 8 editorial on Kathy Mayer, and Elliott Wentz’s article on the Pam Burrows Honor Trial? Why are Gary Webb (who termed the “Westmoreland Four” trial a “Kangaroo Court”) and Thomas Vandever (who wrote that this year’s DVIR was “truly a war criminal”) both still holding positions of importance on the staff of the newspaper? The BULLET IS an example of a free press, and they are proof. 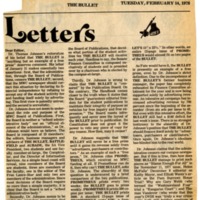