Editorial answering a letter written to The Bullet at Mary Washington college about women's rights needing more attention. The writer of the letter believing the Equal Rights Amendment would do that.

You (Ellie Schettino, Bullet, April 15, 1976) write: "Women have been and always will be equal to men, especially intellectually. It's about time the government recognize this." The government already has recognized it: Article VI of the 1964 Civil Rights Act states "That each federal department and agency shall take action to end discrimination in all programs or activities receiving federal financial assistance in any form. This action shall include termination of financial assistance." More to the point, Article VII of the same Act states "that it shall be unlawful for any employer or labor union with twenty-five or more persons after 1965 to discriminate against any individual in any fashion in employment because of his race, color, religion, sex, or national origin and that an Equal Employment Opportunity Commission shall be established to enforce this provision by investigation, conference, conciliations, perfusion, and if need be, civil action in federal courts." So, economic equally is already written on the federal statue books. We do not need more legislation; if a law were the only thing needed to grant women the equality you claim they lack, there is already one. What will ERA accomplish that the 1965 Civil Rights Act did not accomplish?

Further, you write "(…many married women are extremely successful career-wise). Yes, we need the freedom of choice!!" I see here a contradiction, because if many "women are successful career-wise," then the avenues to that success must already be open to them. If this is true, there already is the freedom of choice of which you speak, and we do not need ERA. I think it is most inappropriate for you to bring up the issue of women priests in an article entitled "ERA." Even if ERA were to pass, I fail to see how it would affect a church policy that was initiated in Rome. Have the pro-abortion laws in America in any way modified the Pope's stand on abortion. Also, although I am indeed sorry that you consider yourself cheated out of a Parrish Scholarship by your church, the U.S. Congress is not the proper body to petition with your grievance. It is purely a matter that must be settled within your church.

One last observation: I find your statement "Perhaps the anti-ERA measures pushed by some women (?) are the result of male chauvinist pressures to keep women in the household" a childish slur at those women, some who may even be as excessively intelligent as yourself , who disagree with you on the ERA issue. To lump your opposition into the general rubric of "Slave" is as asinine as their labeling the fine ladies of NOW "a bunch of lesbians who are trying to destroy the family." I would suggest that you follow your own advice and not inflict your "viewpoints on the lifestyles of others." They are as entitled to their opinions of ERA as you are to yours.

I am in favor of complete economic equality for women in the job market. I am not at all positive that ERA would bring us any close to that goal. We already have the necessary legislation: it is time we enforce the equality laws already in existence, rather than merely pass another one that will also go ignored. You ask "Why not ERA?" I ask "Why ERA?" 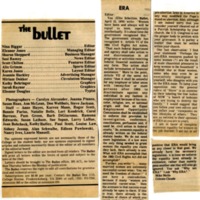