An editorial about the Gay Student Union at Mary Washington College and the student body's reaction to it, arguing in support of the club.

For some obscure reason, a sizable number of MWC students cannot believe that a Gay Student Union exists on campus, (perhaps it would be more appropriate to say, rather that they don’t want to believe it). It is surprising that so many can expect the absolutely ridiculous—that Mary Washington, the world, would be relatively void of people with varying mindsets. It seems they seclude themselves voluntarily.

It’s a weakness…a laziness, actually, to believe that everyone should be and is (unless obviously otherwise) absolutely the same. This sameness is referred to by many as “normality.” It strikes me as sad that so many invest so much of their faith in normality when so few of us fit exactly into that confining category.

So, Mary Washington, the Gay Student Union does exist. We must come to grips with that fact that diversity lives (thank God) and is flourishing. The union sponsors parties, holds discussions, performs information services for the college population and the townspeople and offers support for the Mary Washington Gay Community.

Happily, we have experienced little interference with our purpose or activities. We have, however, (not unlike the other organizations of diversity) been the victim of a major problem group on campus. If any of us are “trouble-makers,” these villains certainly are. The Hillel Club, the Afro-American Club, NORML, and we have all undergone suppression at the hands of the sign-ripper-downers.

The Gay Student Union has recently been considering applying for Inter-Club Association approval. As the GSU has been in existence for 2 years, this possibility was seriously discussed with Debbie Love, Former ICA president, prior to the constitution controversy. Ironically, the first problem confronted in this process was with the required list of ten members by name. It has basically been decided to solicit names of uninvolved supporters rather than actual members, as few members can afford to bear the consequences of disclosure.

The next GSU Party will be held on Saturday, February 11 at 8 pm. The address is 1104 William Street (Apt 812). Mandatory attendance for gays. Hall offenses will be given! 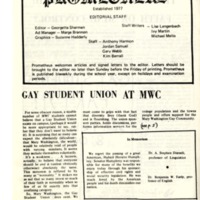 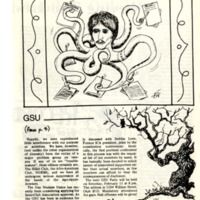