Closing the door on innocence

Closing the door on innocence

News article covering Mello's continued defense of Joseph Spaziano 23 days before his execution is carried out.

A reporter once found Public Defender Bob Jagger pacing his office floor as nervously as if he were the defendant about to go on trial. I asked Jagger why he was so anxious, since it was hardly his first murder case.

“But this guy is innocent,” he said. “I'm afraid of making some mistake that will get him killed.”

Fortunately for them not, the jury thought the man innocent too.

I have written about many other criminal cases over the ensuing 30 years. What strikes me now is how very few other defense attorneys have proclaimed their clients’ innocence with such moral certitude as Jagger voiced that day. Almost always, they turned out to be right.

So I urge you today to read Michael Mello’s heartfelt account, beginning one page 1D of this section, of his efforts, futile so far, to save Joseph “Crazy Jow” Spaziano from Florida’s electric chair, where he is now scheduled to die in just 23 days.
It brings to mind how someone once described law as the “bastard offspring to justice.” In that instance, it was to decry mercy for guilty men. In this, the courts are using the law as an excuse to avoid facing the only question that can verify the justice or injustice of Spaziano’s execution: Was he proved guilty, beyond a reasonable doubt, of murdering Lynn Harberts? He was not.

It doesn't matter that he was a biker, an outcast, a card-carrying Outlaw, or even that he also is a convicted rapist. What does matter to us all, if we do not want outrage perpetrated in the name of us all, is whether he is guilty of this murder. Even the jury had doubts, voting 9 to 3 for a life sentence instead of death. But though there is now impressive evidence that Spaziano’s trial was unfair and his conviction unjust, the courts have relied on procedural pretexts- technicalities, if you will- to refuse to let him present any of it to a new jury.

The state’s entire case depended not he shaky testimony of a 16-year-old boy whose memory has been “refreshed” by hypnosis, at the hands of an arguably unqualified hypnosis who asked leading questions for the police. (The same hypnotist contributed to the infamous murder convictions of Freddie Pitts and Wilbert Lee, whom Gov. Reunion Askew eventually pardoned because he doubted their guilt.)
The Florida Supreme Court no longer allows testimony induced by hypnosis. But where this was “harmless error” in multiple murder Ted Bundy’s case, the courts are content to let it be fatal error in Spaziano’s.

There is also evidence that police withheld evidence pointing to the possible guilt of another man. Other men have been set free from death row for that. Not Spaziano.

What out to be an unceasing search for truth has becom a morbid game of “Gotcha!”

What is even more troubling is that Gov. Lawton Chiles, a man of conscience, has shut his mind and heart to the issue of Spaziano’s possible innocence.

Our tradition acknowledges that the justice system can miscarry. This is one of the reasons for the power of executive clemency.

Florida’s governor must share with his elected Cabinet, at least three of whose sex members must approve his recommendation for clemency. But though governors and Cabinets of the past weren't afraid to grant life sentences in similar cases, there haven't been any commutations for Florida’s death row since the third year of Bob Graham's first year, 14 years ago.

Chiles wouldn't even give Spaziano a hearing.

“It's one of the more frustrating experiences I've ever had,” says Tom Horkan, the longtime lobbyist (now retired) for the Florida Catholic Conference, who had signed Spaziano’s clemency petition “… He (Chiles) just has a flat-out attitude to the effect that it's up to the courts and it's not up to him.”
Horkan said he had presented the governor’s office with Chief Justice William Rehnquist’s description of clemency as “’the fail-safe’ in out criminal justice system.” It was no use.
In the 1993 case Horkan cited, the Supreme Court had ruled 6-3 that the Constitution does not bar states from executing people who may be innocent. But if governors like Chiles won't step in either, there is not fail-safe at all.

“Everybody denies responsibility,” Horkan complains bitterly. “He (Chiles) says its up to the courts, the courts say it's up to the executive.”

W. Dexter Douglass, the governor’s general counsel, argues that Spaziano has a hearing before Graham signed his first death warrant 10 years ago.

Indeed, some things have changed. No one really thought that warrant would be carried out. It was assumed the courts would block it, as they did. But Spaziano did not get a new trial either. And of course, neither Chiles nor any of the present six Cabinet members sat in on the 1985 hearing.

You would think they would be willing to hear Spaziano’s case for themselves if his blood had to be on their hands.

At last count, there were 350 other people on death row, most of them guilty as hell. Aren't those enough, Governor? 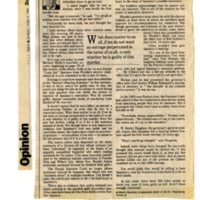