This MWC Newspaper article is responding to the pamphlet PROMETHEUS's criticism of the administration and its use of power.

In the article that appears on page one of this issue and the latest issue of PROMETHEUS, Jim Boyd make some interesting observations. However, I think his placement of responsibility is somewhat misdirected. I say somewhat because it is true that the administration apparently blithely superseded the handbook. But, while the administration committed the act, the Senate tolerated it. For if the student body, through their elected representatives in the Senate, felt strongly enough about this Kathy Mater matter they could recall her: Amendment I. Recall-"Any student official may be recalled if he has failed to... uphold the standards of the office." Therefore it is incorrect for Boyd to give the administration all the blame.

Whether or not the removal of the S.A. President is an advisable policy is a question which must ultimately be answered by the student body of MWC. All side must be given a fair hearing and an equal opportunity to state their side o the issue. As students concerned with the maintenance of an effective student association, we must deal directly with the issue at hand. However, the issue here is much larger than Kathy Mayer; this is why Jim Boyd did not remain in office or attempt to impeach Mayer.

The basic issue presented here is constitutional. During a meeting with President Woodard, Boyd was informed that Woodard possesses absolute veto power over the S.A. Constitution: Article IV: Authority-"The authority of the Student Association is derived from delegation by the President of the College and from the student body of the College." Why then, Boyd asks(in light of the provision in the constitution), have a constitution at all when only one signatory of the agreement is bound by its precepts. The example which Boyd has disclosed is symptamatic of the phenomenon that Michael Mello discussed in the first issue of the PROMETHEUS: the students have no power!

In this particular instance the student body may, if it chooses, suspend the administration's suspension of the constitution by removing Kathy Mayer from office. AS stated previously in this editorial, the students may just as easily and in my opinion with a great deal more justification) dismiss the question of Mayer's eligibility for office as a technicality.

But what about the crucial times that we are impotent in the face of similar administrative vetoes of our constitution? It appears that we will just have to watch on in frustration. 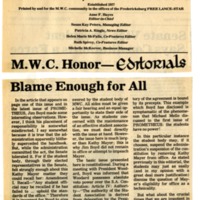