Michael Mello confronts the FDLE on their weak case against Joe Spaziano.

In a letter to Gov. Lawton Chiles’ general counsel, Vermont attorney Michael Mello said the Florida Department of Law Enforcement is not conducting an objective, honest and competent “search for the truth.”

Spaziano, who asked for clemency this week, received a reprieve from a scheduled June 27 execution after questions arose about the reliability of a key witness in his two cases.
“Isn’t it enough that the state of Florida framed Mr. Spaziano twice already?” Mello asked in his letter to lawyer Dexter Douglass.

Officials in Chiles’ office were unavailable for comment Friday. But FDLE spokeswoman Liz Hirst said her agency saw the letter, which was dated Thursday, but will not trade barbs with Mello.

“That’s not productive or in anyone’s best interest,” Hirst said. “We are not really going to get into an issue with Spaziano’s attorney. That’s not the point of what FDLE is doing. What we are doing is a complete, fair and objective review under the direction of the governor.”

Hirst said she expects FDLE will investigate for several more weeks before issuing a report to Chiles. As part of that report, Chiles is expected to view a videotaped statement from the key witness, Anthony Dilisio, 37, of Pensacola.

Dilisio, now a lay minister, has told reporters in recent weeks that his testimony was manufactured by police. It is unclear what he told the FDLE about his 20-year-old testimony, which was enhanced by hypnosis. The videotape has not been released, angering Mello, who claims FDLE is sandbagging because the video shows Dilisio recanting.

“If Mr. Dilisio is a flake, he’s your flake,” Mello wrote.
Mello also criticized Douglass’ comments to The Orlando Sentinel that there was more evidence in the case than just Dilisio’s testimony.

“If FDLE has dredged up – or manufactured – new witnesses against Mr. Spaziano, why didn't those witnesses testify at trial? The prosecution’s case was weak enough as it was,” Mello said.

At the 1976 trial in Sanford, Dilisio, then 18, testified that Spaziano showed him the mutilated body of the woman he was accused of murdering in Seminole County. A year earlier, Dilisio also testified in a separate case that Spaziano bragged about raping a 16-year-old Orange County girl, slashing her neck and eyes, choking her and leaving her for dead.

The Outlaws motorcycle club member was given a life term for the 1974 rape and sentenced to death for the first-degree torture-murder of Laura Harbert, an 18-year-old hospital clerk. 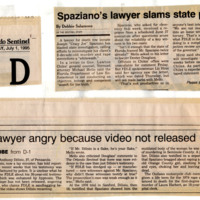