Four residents of Westmoreland Hall at Mary Washington College believe the College administration's handling of their discipline did not follow normal judicial procedures and is unfair.

On November 29, four Westmoreland male residents Mitch Sproul, John Bartenstein, Peter Back, and Steve Calhoun appeared before an Administrative Hearing charged with "(1) conduct in Westmoreland Hall which is detrimental to the environment of the College and contrary to College rules and regulations and (2) vandalism to College property in Westmoreland Hall." President Prince B. Woodard, who is invested with the sole authority for making the decision, apparently found the students guilty of both counts and notified them verbally and by letter of their punishments.

His decision entailed three students being rejected from Westmoreland Dormitory. The fourth man, Mitch Sproul, was permitted to "continue to reside in Westmoreland Hall for the remainder of the semester without the privilege of having any visitors in your room or your visiting or entering any other student room in that Hall or visiting or entering any other residence hall on campus. "Further, his "continuing in Westmoreland Hall is conditional to your not being involved in any way with a violation of rules or regulations of the Hall or of the College. Should you violate any such rule or regulation or create in any way a disturbance including excessive noise, to the detriment of other students, your right to remain in the residence hall will be terminated."

The main impetus behind this case was Scott Sharer, Judicial Representative of Westmoreland Hall. Sharer reported that he had received numerous complaints from residents of the dorm regarding noise caused by the four individuals. Some of these noise complaints dated back to the third week of the semester. The noise complaints continued intermittently until the Administrative Hearing.

Around September 25th Sharer was approached at 2:30 a.m. by resident Laura Bannister who reported she had been awakened by "loud male voices" in room 303 next door and that she then heard some objects fall from the window of room 303 to the ground outside the dorm.. This was followed by loud, long screams, obviously male screams."

Sharer, upon investigation, learned that Bartenstein, Back, and another individual had entered the room uninvited and obviously under the influence of alcohol." During an apparent pillow fight two stereo speakers and a fan were knocked from the open window to the ground. Sharer, in consultation with Dorm President Mayo Carter and Judicial Chairman Cindy Reeves, decided to "work out a punishment fitting to the crime yet positive toward the spirit of greater cooperation within the dorm." Sharer served the three men with a document that they "readily signed."

The notice read: "We the undersigned do so accept the punishment of locking Westmoreland Dormitory for the period of one week for visitation and noise violations ..." We also understand that any further infractions will be dealt with to the fullest extent of the legal guidelines set by the College."

Sharer then went on to say that frequent noise violations occurred throughout the semester and the four men were repeatedly warned that this behavior was unacceptable. On November 20th Sharer reported that he found damage in the hall "in the form of garbage, a water fountain off the wall, and a window broken." Earlier a telephone stand had been destroyed. On November 21st Sharer "observed a broken water fountain, a broken door, a broken telephone table... a broken fire extinguisher, shaving cream on the walls and doors, oranges smashed on the floor, and a broken window." Sharer issued a final warning to the entire hall that stated "there would be no more trouble in first north Westmoreland hallway.

Sharer claimed that it was all but impossible to determine who had caused this damage because several dormitory residents "lived in fear" of these four men. Despite Sharer's final warning, noise violations continued. Later that morning Bartenstein was issued two hall offenses for leaving the door unlocked. On Tuesday morning an event involving vomiting, which Mitch Sproul termed a "group retch" occurred. It had not been determined whether this occurred in a private room or in the hall. The events of these two days precipitated action which led to the Administrative Hearing.

The next night more noise ensued, and hall offenses were issued to Steve Calhoun and another resident: an altercation between Calhoun and Sharer was narrowly avoided.

Interviews with both the four accused and witnesses at the hearing (Cindy Reeves, S.A. Judicial Chairman, and Scott Sharer, Westmoreland Judicial Representative) reveal that there was no clear evidence presented and no proof brought forth to establish a guilty verdict on the vandalism charges. Yet the letters, informing the four students of Woodard's decision, did not specifically state the charges on which they were convicted. President Woodard, whose sole responsibility this decision was, declined to comment. Dean Juanita Clement and Cindy Reeves, witnesses at the hearing, also declined to comment on the nature of the penalty.

However, Scott Sharer as well as the four accused felt that the decision was based essentially on noise. Sharer pointed out that another residential student was responsible for some of the vandalism charges. Sharer believes that this may have entered into Woodard's decision since the handbook provides (pp.56-57) "Anyone in a residence hall to which he or she is not assigned a room by the college is considered a guest ... All guests must abide by the rules and regulations of the college and the student is responsible for the conduct of his guest at all times. Any damages to property will be paid by the students and/or guests."

The decision to convene an Administrative Hearing rather than Joint Council or Judicial Court was made by Barbara Stammerjohn, Cindy Reeves, and Scott Sharer, in conference with President Woodard. Ms. Reeves stated that she felt the matter could be better handled by the administration for essentially five reasons. Firstly, college employees were involved (dorm mother Mrs. Janet Barnes, Dean Juanita Clement, and Campus Police officers) in the disposition of the case. Secondly, Reeves felt that the problem of noise and vandalism in Westmoreland required an immediate solution and concluded that the Administrative hearing could sooner dispose of the problem than could the Joint of Judicial Court. Thirdly, Ms. Reeves said that it was too much trouble for Judicial to handle. Fourthly, because no hall offenses had been issued for the specific charges of noise, it did not constitute a judicial complaint. Fifthly, vandalism offenses are not specifically mentioned in the provisions stating judicial territory. Thus, Ms. Reeves feels that the charges cannot be handled by Judicial Court , although vandalism charges were handled by Judicial last year.

The accused are uncertain (though they asked President Woodard) exactly what charges they are convicted of. They also feel that they were denied due process of law and trial by their peers. Their complaints are essentially three. Firstly, they are frustrated by the fact that there was no appeal. Secondly, they are bothered because no transcript of the hearing was made. Thirdly, their letters of accusation were, in their opinion, vague and failed to enumerate precisely what charges of vandalism they were to face. They felt that this made the preparation of a proper defense difficult if not impossible. Finally, they believe that their case should have been heard by the student Judicial body rather than by Woodard. 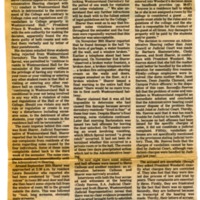