Spaziano later claims his innocence in court and Gov. Lawton Chiles delayed Spaziano's execution based on this information.

[start of the first column]

STARKE -- Outlaws motorcycle gang member Joseph "Crazy Joe" Spaziano grows quiet when asked about his impending death in the electric chair for the rape, mutilation and murder of a teenage hospital clerk.

He rubs his handcuffed hands against his chin and tears fill his eyes as he proclaims his innocence.

"The only thing Im guilt of is smoking a few reefers," he said from behind a glass partition.

Unless his last-minute appeals are successful, Spaziano will be put to death for the 1973 rape, torture, murder and mutilation of Laura Lynn Harberts, an 18-year-old Orlando woman.

"I don't know the girl, I know nothing about it," the heavily tattooed Spaziano said.

Spaziano, 49, who wears a skull and crossbones ring and has the same emblem with the name of the Outlaws tattooed on the inner side of his right arm, believes he was framed because of his membership in the gang.

"I never took the stand. Who would believe an Outlaw?" he said. "There were so many lies. I figured a higher court would see that."

Spaziano has shaved his head, something he said he has done after all five of his death warrants. He did not want prison guards to do it in preparation for his electrocution.

"So they don't have to touch my head. I don't like people to touch me," he said.
[end of the first column]

[start of the second column]
Spaziano had been scheduled to die in June, but Gov. Lawton Chiles delayed the execution after Spaziano's attorney Michael Mello raised questions about Spaziano's guilt.

Oral arguments in his appeal are scheduled today before the Florida Supreme Court.

Anthony DiLisio, the star witness against Spaziano, has said he lied when he testified Spaziano allowed him the bodies of Ms. Harberts and another woman at a Seminole Count Dump.

Dilisio, 38 and living in Pensacola, now says the information came from police, who had him hypnotized to help his memory.

After interviewing DiLisio and conducting an investigation, the Florida Department of Law Enforcement issued a secret report to Chiles that persuaded him to sign a new death warrant.

"I really thought the governor was looking at my case," Spaziano said.

Several witnesses linked Spaziano to Ms. Harberts and the dump where the decayed bodies were found Aug. 22, 1971. But DiLisio, who has a long history of alcohol and drug abuse, was the only one who could directly connect Spaziano to the bodies.

The governor has refused to release the secret report, saying he didn't want to reveal the names of confidential witnesses. The report reportedly contains allegations that a witness tied Spaziano to two murders and another rape.

Spaziano, who got a life sentence in an unrelated 1975 rape conviction, has spect much of his 19 years on death row drawing and painting cartoon characters. He is especially fond of Mickey Mouse and other Disney characters. He also likes to paint pictures of motorcycles and their riders.

Since being placed in a cell just steps from Florida's electric chair, "Old Sparky." Spaziano said, he has been restless.

"Every day is hard. I've got to get ready for it," he said. "I'm just waiting to die. I do a lot of walking back and forth. I don't sleep much.

"I want to get as much life in as I can. People can sleep when they are dead." 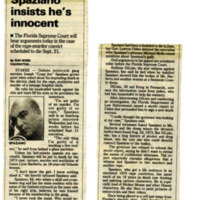