Spaziano speaks out about his execution

Spaziano speaks out about his execution

Two weeks before Spaziano's scheduled execution, he insists his innocence in the murder of Laura Lynn Harberts. Spaziano feels helpless as he is declined a last-minute defense effort by the state of Florida.

[heading]
Spaziano speaks out about his execution

Budget cuts are closing the organization that would have done much of his legal work.

[Image] David Greenberg
[caption] Joseph Spaziano struggles for words at Florida State Prison on Tuesday morning as he talks about his execution scheduled for Sept. 21.


[start of the first column]
STARKE -- During a rare interview at Florida State Prison on Tuesday, Joseph Spaziano reflected on life in the Outlaw motorcycle gang, described 20 years on Death Row and criticized the people who control his fate.

If executed as scheduled in two weeks, Spaziano will be the first Death Row inmate to die without benefit of a serious last-minute defense effort since the death
[end of the first column]

[start of the second column]
penalty was reinstated in Florida in 1976. He was sentenced to die for the 1973 murder of Orlando nurse Laura Lynn Harberts.

The day before Spaziano's fifth and most recent death warrant was signed by Gov. Lawton Chiles, the Volunteer Lawyers Post-Conviction Defender Organization announced that federal budget cuts were forcing it to close. The organization would have done the investigative work and much of the legal work for Spaziano's last-minute appeals.
[end of the second column]

[start of the third column]
"There's no one to help me, " Spaziano said Tuesday during a 45-minute interview.

When Spaziano talked about his next -- and maybe his last -- few weeks, he grew quiet, rubbed his shackled hands against his face and fought back tears.

It was the only time during the interview that the small man with the shaved head and furry eyebrows seemed uncomfortable. He raised his tattooed arms to his face in a seeming effort to hide.

He insists that he did not kill Harberts.

[start of the fourth column]
"I've been telling the truth for 20 years, and they won't believe me," he said. "Now the kid who put me in here is telling the truth, and they don't want to believe him. What is there to say? What can I do? Mike's doing the best job he can, but I'm in trouble."

Spaziano's attorney is Michael Mello, a University of Vermont law professor who normally would have help from the volunteer lawyers' organization. The law says Spaziano has the right to counsel in Florida. But Mello and others familiar with the case question whether he has it. And there's no case law on such a circumstance.
[end of the fourth column]

SPAZIANO
continued from Page 1B

[start of the first column]
Spaziano's strongest criticism is aimed at Chiles, his staff and the Florida Department of Law Enforcement. "I really believed after he stayed my fourth warrant that this guy was for real," he said. "But they're all the same. No one in Tallahassee likes me."
Dexter Douglass, Chiles' clemency attorney, says Spaziano's comments --- along with Mello's protests --- are all part of the defense's strategy.

"There's been no showing made by anybody that this man is entitled to clemency," Douglass said.
Spaziano suggests that the is in this position now because of his background as an Outlaw.

"It's because of what I am," he said. "I was a biker. I rode with the Outlaws. But I was clean. All I ever did was smoke reefer. If they want me to confess that I smoke reefer, I will. I asked the judge if he wanted to
[end of the first column]

[start of the second column]
smoke before he sentenced me."
With an overworked defense attorney at his original trial, Spaziano opted to not take the stand.

For the last 20 years, Spaziano hasn't been a biker. He's been a Florida Death Row inmate.

To occupy his time for the last 20 years, Spaziano has painted. "I did it from the time the cell lights went on until they went off each night," he said. "I'm a cartoon freak. I painted Disney characters and Easy Rider (biking) stuff. I would send them to my people, and they would send me canteen money for cigarettes."

It's almost unheard of for lawyers to allow inmates facing execution' to grant media interviews. It never happens without attorneys present. But Mello and Spaziano are doing it to spark interest in the case. And Mello, who started teaching two weeks ago, must allow Spaziano to do it alone. "I don't know what else to do," Mello said in a phone interview from Vermont.
[end of the second column]

[start of the third column]
Spaziano who will turn 50 on Tuesday, was arrested nearly two years after Halberts' sexually mutilated body was found in a trash dump near Altamonte Springs, a suburb of Orlando.

He was found guilty by a jury that recommended life in prison. The judge overturned the recommendation and sentenced Spaziano to death.

During Spaziano's fourth death warrant last June, the main witness against him, Tony Dills, said he gave his testimony under hypnosis --- no longer acceptable in Florida courts.

As a result, Chiles stayed Spaziano's execution and asked the Florida Department of Law Enforcement to investigate. The results of that investigation are known only to FDLE, the governor and his legal aides, but were enough to sign a new death warrant. Chiles will not release the information in the FDLE report.

That leaves Spaziano with a lot of questions.

"I wonder about the governor," he said. "I wonder why he wants to kill me. Who has the answer to that? Only one man, and he won't say."
[end of the third column] 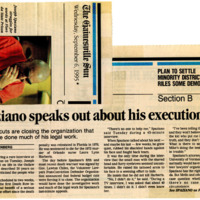 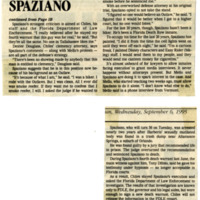