[start of the first column]
TALLAHASSEE - Florida's Supreme Court today will examine the case of "Crazy Joe" Spaziano, who faces the electric chair in two weeks, although it is unclear what the court is looking for in unexpected oral arguments.

"It's not real clear to me, to tell you the truth," said Michael Mello, Spaziano's lawyer, who has filed several 11th-hour pleadings. "I really have only one argument in this case, which is they got the wrong guy."

After nearly 20 years on Death Row, Spaziano is slated for execution Sept. 21 for the murder Laura Lynn Harberts, an 18-year-old hospital clerk whose skeletal remains were found in August 1973 with the remains of another, still unidentified 19-year-old woman among garbage strewn in woods near Orlando.

The case rested on one witness.

Recently, that witness, Tony DiLisio, claimed he lied at the 1976 trial when he said Spaziano had shown him the bodies. DiLisio now says his testimony was coerced.

Gov. Lawton Chiles postponed Spaziano's execution, giving the Florida Department of Law Enforcement time to investigate DiLisio's story. But after the FDLE reported that DiLisio had implicated Spaziano numerous times in conversations with friends, and that Spaziano had implicated himself in a jail house talk with another convict, Chiles signed a new death warrant.

The investigation remains secret. Citing the confidentiality of clemency cases, the governor has refused to make public that FDLE report or the names of the people interviewed.

The Supreme Court has
[end of the first column]

[start of the second column]
reviewed Spaziano's case before. This is his fifth death warrant signed by three governors; Gov. Bob Graham signed one in 1985, Gov. Bob Martinez in 1989 and 1990, Chiles in May and August.

In scheduling a hearing today at 2 p.m., the court has advised lawyers only that it wants to hear arguments on "all pending matters."

Spaziano's lawyer has filed several motions. These include request to delay the execution, request for a new trial and a plea to reopen the appeal of Spaziano's sentence that was heard years ago. They include request to see the FDLE's report, and to provide money for Spaziano's defense - which Mello, a Vermont law school professor, has been handling from afar.

Mello will arrive at the court today prepared to argue for all of this.

"I would have liked to have known whether there was anything in particular they were looking for," Mellow said Wednesday from his home in Vermont. "This is their meeting. I didn't ask for a hearing."

The attorney general's office, arguing for Spaziano's execution, hasn't been given any more advance warning of the court's interests today.

"There is just so much in all those motions, I think the court wants to have an opportunity to let them be heard," said Carolyn Snurkowski, the assistant attorney general appearing in court today.

Supreme Court Clerk Did White suggest the ball actually is in Mello's court.

"I think they will probably wait on Mike and see what he puts his attention on," White said. 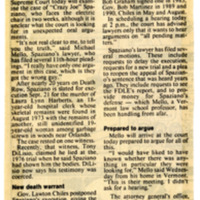