Convicted murderer, Joseph "Crazy Joe" Spaziano awaits decision from Florida Supreme Court regarding his request for a stay of execution. Spaziano is due to be sent to the electric chair in two weeks. His attorney, Michael Mello, argues that Spaziano is innocent, citing faulty testimony from Florida Department of Law Enforcement.

[Title] Spaziano awaits decision
[Author] The Associated Press
[Begin article]
Tallahassee--An attorney for Joseph "Crazy Joe" Spaziano asked the state supreme court for a chance to prove his client is innocent of the murder sending him to the electric chair in two weeks.

A lawyer for the state, however, urged the justices not to stay Spaziano's execution on "mere speculation."

After hearing oral arguments Thursday, Florida's high court will make a decision at its own discretion; Spaziano, 49, is scheduled to be executed Sept, 21 for the murder-mutilation of an Orlando woman 22 years ago.

During the hour-long hearing, justices and lawyers had exchanges about testimony at a trial held nearly 20 years ago, about judicial procedure, about the role of the state's high court in reviewing capital cases.

"The proceeding before us has taken a rather free form," Justice Harry Lee Anstead told Spaziano attorney Michael Mello. "This is the way you have approached this case before the court, and it's obviously causing us considerable difficulty."

Mello, a Vermont law professor, has filed hundreds of pages of pleadings before Florida's high court, but he began his presentation by telling justices that all the issues were secondary because his client did not kill Laura Lynn Harberts.

The 18-year-old hospital clerk's body was found in an Altamonte Springs dump in August 1973.

"I believe that if I had an opportunity to prove Mr. Spaziano's innocence before a jury, he would be acquitted," Mello said. "All I'm asking for...is a stay of execution and the provision of resources."

Anthony Dilisio, a key prosecution witness in Spaziano's trial, recanted his testimony earlier this year, prompting Gov. Lawton Chiles to suspend Spaziano's fourth death warrant. However, after an investigation by the Florida Department of Law Enforcement into the recent comments by Dilisio, Chiles said he had no doubts about the case and signed a fifth death warrant last month.

But Anstead questioned the strength of Mello's appeal before Florida's high court.

"I can't imagine new evidence more substantial than a disavowal of the critical testimony by the witness," Mello answered.

Anstead asked Mello if he could have jumped through "those two ordinary hoops."

Justice Ben Overton then interrupted the attorney, asking why he had not presented an affidavit from Dilisio recanting his testimony. [end article] 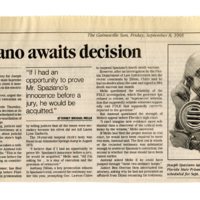