Joseph Spaziano gets denied a stay of execution. The Florida Supreme Court decides that the new evidence regard the fact that a key witness in the 1976 murder trial lied must be heard by a Sanford court. The lower court was believed to be the place in which Spaziano may receive his stay. The testimony of Anthony Frank DiLisio was what put Spaziano on death row. DiLisio was to appear in the Sanford court and admit to lying. Key in the trial will be an affidavit filed by Michael Mello in which DiLisio swears he lied. The issue of DiLisio’s lying has led to various stories from DiLisio. DiLisio admitted to believing that the testimony, he made in 1976, was implanted in his head through hypnosis.

[subheading]
The state Supreme Court said a lower court should decide whether to stay his execution.

By Michael Griffin and Jim Leusner
Of the sentinel staff

[start of the first column]
TALLAHASSEE- The Florida Supreme Court refused Fri-day to halt the execution of Joseph ”Crazy Joe” Spaziano, but ordered a Sanford court to hear new evidence that a key witness in the 1976 murder trial lied.
[end of first column]

[beginning of 2 column]
In a split decision, the justices determined the state’s high court had no reason to consider the appeal, since Spaziano’s at-torney was arguing his case in the wrong court. But they also agreed the issues raised could be compelling enough for a low-er court to grant a stay.

All the justices agreed the matter should be heard this fri-day in Sanford. Three of the sev-en judges dissented in part, ar-going that Spaziano, 49, should get an immediate stay.

The ruling sets up a scramble by lawyers to prepare for a hear-in just six days before Spa-ziano’s scheduled Sept. 21 ex-ecution for the 1973 mutilation and murder of Orlando hospital clerk Laura Lynn Harberts.

Anthony Frank DiLisio, the witness who put Spaziano on death row with his testimony, likely will have to tell a judge and a prosecutor he lied and continued to lie for 20 years. Art Harberts, Laura Har-
Please see SPAZIANO, A-11
[end of column 2]

Berts’ father, said he will attend the hearing and expressed dismay that DiLisio “can’t or won’t get his story straight.”

The last time he saw DiLisio was at the trial, when DiLisio, then 17, was the star witness.

“Tony impressed me as a good kid,” Harberts said. “He apologized to us, you know, Laura’s family, for not coming forward sooner and sav-night us all the anguish.”

A key factor in Friday’s ruling appears to be an affidavit filed by Spa-ziano attorney Michael Mello in which DiLisio swears for the first time that he lied at the trial.

[start of the first column]
“I never, under any circum-stances, went to the dump sight [sic] with Joseph Spaziano,” the affidavit reads. “I went there in the company of law enforcement investigators.”

It is the first statement DiLisio has made under oath since the trial, in which said Spaziano bragged about raping and killing women, then showed him the bodies of Har-Bert’s and an unidentified woman at a dump near Altamonte Springs.

It is the latest version of the story DiLisio has given since he first told The Miami Herald in a June that his testimony was false.

Shortly after that, DiLisio told Florida Department of Law Enforce-ment agents that he thought police drugged during hypnosis and planted the memories. The inter-view was videotaped, but FDLE spokesman Liz Hirst said Friday that DiLisio was not under oath when he made the statements.

Later he told The Orlando Sentinel he remembered going to the dump with Spaziano but thought those memories were planted in his mind through hypnosis. DiLisio also said Seminole County sheriff’s de-tective George Abbgy, who has since died, had threatened to charge him with complicity in the crimes if he did not implicate Spaziano.

And on Friday, in a column in The Miami Herald, DiLisio was quoted as saying: “It came from me. Nobody could program me to do anything I didn’t want to do. I wanted to do it. But it was false.”

On May 13, 1975, detectives taped DiLisio recalling how Spaziano bragged about mutilating and kill-night women. The teen offered to be hypnotized to help him recall more. At the time, Floridians law allowed hypnosis-enhanced testimony.

DiLisio was hypnotized May 15 and 16, 1975. During the second ses-Simon he described going to the dump with Spaziano and seeing and smelling the bodies. He said he had tried to forget it.
[end of column 4]

[beginning of column 5]
Questioned by Spaziano’s lawyer and a prosecutor on Nov. 12, 1975, DiLisio said again that the biker he once idolized had taken him to the dump and displayed the bodies.

During the January 1976 trial, DiLisio, again under oath, told ju-rots the same story, even after his life had been threatened by Spa-ziano’s associates from the Outlaws motorcycle gang.

Former Assistant State Attorney Claude Van Hook, who prosecuted Spaziano, said he thinks DiLisio told the truth during the trial but is now recanting out of fear.

“This young man had the ring of truth,” Van Hook said. “He was afraid of Spaziano’s associates and still had the intestinal fortitude to get on the stand and tell the truth. Who would believe he lied?”

Mello could not be reached for comment Friday. He refused to speak to The Orlando Sentinel.

Gov. Lawton Chiles, who signed a fifth warrant for Spaziano after an FDLE investigation turned up wit-nesses to corroborate DiLisio’s origi-nal story, did not waver in the deci-sion Friday.

Dexter Douglass, Chiles’ general counsel, said he thought Friday’s ruling was a good one.
DiLisio’s sworn affidavit, he said, “means no more than any of his other sworn statements. Let’s see what happens when he’s challenged by a prosecutor and other witnesses get a change to testify.”
[end of column 5] 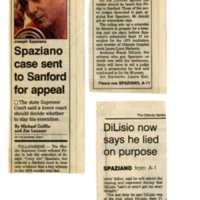 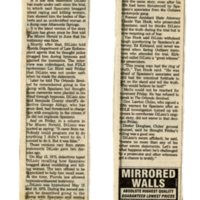