This article reviews the Flordia Supreme Court's 4-3 split when deciding to stay Joseph Spaziano's death sentence after a key witness recanted their statement from twenty years ago.

[Page header]
B-2 ** The Times-Union, Jacksonville, Saturday, September 9, 1995
[End Page Header]
[Article Title]
Court denies stay for Spaziano
By Jackie Hallifax
Associated Press
[End Article Title]
[Column One]
TALLAHASSEE -- The Florida Supreme Court refused yesterday to stay the execution of Joseph "Crazy Joe" Spaziano but ordered a lower court to hold a hearing within a week into his claims of innocence.
In an unsigned opinion, the justices agreed a trial judge should consider the recent recantation of a key prosecution witness who said he lied during Spaziano's trial nearly 20 years ago.
But the state's high court split 4-3 in its refusal to delay the execution.
[End Column One]
[Column Two]
Spaziano, 49, is scheduled to die in Flordia's electric chair Spet. 21 for the August 1973 murder-mutilation of Laura Lynn Harberts, 18, of Orlando. Herberts body was found in an Altamonte Springs dump.
The key witness at Spaziano's trial was Anthony DiLisio, who recanted his testimony earlier this year, prompting Gov. Lawton Chiles to suspend Spaziano's fourth death warrant.
However, after an investigation by the Flordia Department of Law Enforcement into the recent comments by DiLisio, Chiles said he had no doubts about the case and signed a fifth death warrant last month.
[End Column Two]
[Column Three]
Richard Martell, who oversees the state lawyers who defend death sentences, said he was still studying the decision. Micheal Mello, the Vermont law professor who represents Spaziano, did not respond to a request for reaction.
Dexter Douglass, Chiles' general counsel, said a week should be sufficient for a lower court to hold a hearing.
"There's plenty of time for this hearing," he said. "there's plenty of time for it to come back up to the Supreme Court."
The trial court will decide if the recanted testimony is credible and substantial enough to probably change the verdict, according to the majority opinion.
[End Column Three] 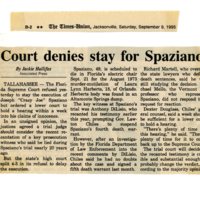