The Florida Supreme Court refuses to stay the execution of Joseph Spaziano, but orders a lower court to hold hearing. In a 4-3 split, the minority opinion believed that Spaziano deserved an indefinite stay of execution.

[subheadin]
In a 4-3 decision, Florida's Supreme Court denies a stay of execution for the inmate.

[Start of first column]
TALLAHASSEE-The Florida Supreme Court refused Friday to stay the execution of Joseph "Crazy Joe" Spaziano but ordered a lower court to hold a hearing within a week into his claims of innocence.

In an unsigned opinion, the justices agreed a trial judge should consider the recent recantation of a key prosecution witness who said he lied during Spaziano's trial nearly 20 years ago.

But the state's high court split 4-3 in its refusal to delay the execution.

Spaziano, 49, is scheduled to die in Florida's electric chair Sept. 21 for the mutilation-murder of an 18-year old Orlando woman in August 1973.

"We decline at this time to grant a stay of execution but allow the trial court an opportunity to address this issue," the majority said in a ruling that came just 26 hours after oral arguments.

The other three justices said they agreed a lower court should review the recanted testimony but argued against setting a dead-line for the hearing.


Harry Lee Anstead, Justice Gerald Kogan said he believed Spaziano should be given an indefinite stay of execution.

Spaziano is condemned for the murder of Laura Lynn Harberts, whose body was found in an Altamonte Springs dump.

However, after an investigation by the Florida Department of Law Enforcement into the recent comments by DiLisio, Chiles said he had no doubts about the case and signed a fifth death warrant last month.

Richard Martell, who oversee the state lawyers who de-fend death sentences, said he was still studying the decision.

Michael Mello, the Vermont law professor who represents Spaziano, did not respond to a request for reaction.

Dexter Douglass, Chiles' general counsel, said a week should be sufficient for a lower court to hold a hearing.

The trial court will decide if he recanted testimony is credible and substantial enough to probably change the verdict, according to the majority opinion.

Kogan wrote for the minority that the majority was setting an unrealistic time frame to weigh the importance of DiLisio's recanted testimony.

"Such a restrictionn is without precedent in our case law and tends to create an atmosphere of panic for resolution of an issue that requires calm and deliberate resolution," Kogan wrote.
[end of the second column]

[Quote] Joseph Spaziano, 49, is scheduled to die in Florida's electric chair Sept. 21 for the mutiliation-murder of an 18-year-old Orlando woman in August 1973. [end Quote]

"Indeed, this is an issue demanding the most careful of attention because its end result could be the state-sponsored taking of a man's life when his guilt has now been called into question."

Kogan pointed out that a death sentence warrants ex-traordinary safeguards because of its finality.

"I cannot see how this core policy is being served by an unseemly rush to execute a man despite a sworn affidavit by the state's chief witness that Mr. Spaziano was convicted on falsified evidence," Kogan wrote.

DiLisio's recantation is just the latest troubling aspect of the Spaziano case, according to Kohan, who cited the use of hypnotically-enhanced testimony, something now banned, and the jury's recommendation for life.

He called Spaziano's conviction a "textbook example how capital trials and postconviction reviews should not be conducted."

Kogan said he believed the high court should grant an indefinite stay "if the governor does not stay or withdraw his warrant in light of our opinion today."

Douglass said Chiles didn't plan on lifting the warrant, which is effective until noon Sept. 26.

"He was satisfied that his duties required him to sign this death warrant," Douglass said. 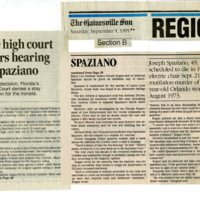