This newspaper article from "The Herald," in Tallahassee, FL describes Michael Mello's fight for a stay of execution for his client, "Crazy Joe" Spaziano. His fight was being challenged by the state's "secret evidence" that was to prove his guilt, after the key witness admitted to false testimony in the original trial 20 years before.

[Beginning of article]
Tallahassee-Hours after scoring a victory in his legal fight to avoid the electric chair, “Crazy Joe” Spaziano on Saturday faced the possibility that his gains could be erased - by his own lawyer.

Late Friday afternoon, the Florida Supreme Court granted Spaziano an evidentiary hearing on his claim that the state’s key witness lied at his murder trial 20 years ago.
But just before midnight Friday, Spaziano’s outspoken defense attorney, Michael Mello, faxed a harshly worded response to the high court, demanding an indefinite stay of Spaziano’s scheduled execution and announcing that he would not participate in the evidentiary hearing, which he termed a “sham.”

Mello complained that he won’t have the time or resources to prepare for the hearing, ordered to be held by Friday. Spaziano is scheduled to be executed Sept. 21.

“If this court intends to kill this innocent man by depriving him of the effective assistance of counsel, then it will do so without my complicity,” Mello wrote.

Mello is a law professor who lives in Vermont. He said in a telephone interview late Friday that it is “obviously impossible for me to be able to do any kind of meaningful hearing with an active death warrant pending.”

But there’s no guarantee that state lawyers will participate.
Mello is doing everything he can to keep the state office, known as the Capital Collateral Representative, out of the case. Mello says CCR allowed an investigator to try to pressure the state’s key witness against Spaziano and that the agency is overworked and has failed to follow up on leads in the past. Mello, who once worked for CCR, does little to disguise his contempt for it.

CCR lawyers have also expressed doubts about the feasibility of preparing adequately for the evidentiary hearing in less than a week.

“Trying to put together this hearing in seven days is just not the way things should be done,” Martin J. McClain, CCR’s chief assistant, said Saturday. But McClain did not threaten to boycott the hearing. He declined to comment on Mello’s allegations about CCR misconduct.

[Top of page]
Sunday, September 10, 1995, The Herald 7B
[Article title]
Spaziano lawyers: Hearing a ‘sham’
[Spaziano, from 6B]
those allegations in Friday’s opinion.

The big fear about the hearing for both Mello and McClain: that prosecutors will use controversial secret evidence during the hearing to rebut their claims on behalf of Spaziano.

The existence of the secret evidence came to light in August, when Gov. Lawton Chiles cited it to justify signing a fifth warrant for Spaziano’s execution. Chiles ordered the secret investigation after the state’s key witness, Anthony DiLisio, told a Herald reporter that his testimony at the trial was false. DiLisio testified at the trial in 1975 that Spaziano, an Outlaw biker gang leader, took him to a rural Orlando trash dump and showed him the body of a murdered 18-year-old woman, Laura Harberts.

But the governor has steadfastly refused to make the report public, citing promises of anonymity made to the witness, as well as state laws that allow him to keep clemency matters secret.

[subheading]
Fear of an ambush
[beginning of article text]

Their fears appeared to be justified late Friday, when the governor’s chief lawyer said it’s possible that some of the witnesses who were interviewed for the secret report will testify at next week’s hearing.

“That will be up to the state attorney’s office” in Seminole County, said Dexter Douglass, Chiles’ general counsel.

How could local prosecutors find the witness if the governor promised them anonymity, as Chiles has said?

“What we promised is what I think I’ve said all along - that we would not reveal their identity to the general public,” Douglass said.

When asked again if the state would reveal the names of the witness to prosecutors, Douglass added that local prosecutors “could find the witnesses the same way we did.”

The secret witnesses include several people who recall hearing DiLisio or Spaziano make statements that implicated Spaziano. Those witnesses probably couldn’t be used to convict Spaziano, because their testimony would be hearsay. But they could be used to discredit DiLisio’s recantation of his trial testimony and block Spaziano’s efforts to obtain a new trial.

The state’s Supreme Court’s order for a hurry-up hearing on Spaziano’s claims runs counter to its recent decisions in other capital cases in which last-minute claims were raised. In several recent cases, the high court has ordered stays of execution so trial courts could hold full-blown evidentiary hearings.

The difference in this case, apparently, was Mello’s failure to file his request in a trial court - the usual route for last-ditch claims. Instead, for reasons that remain unclear, Mello file directly in the state Supreme Court, a move that the high court determined “clearly not authorized.”

[Photo caption]
‘If this court intends to kill this innocent man by depriving him of the effective assistance of counsel, then it will do so without my complicity.’
Michael Mello,
Spaziano’s lawyer 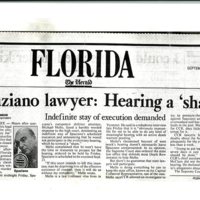 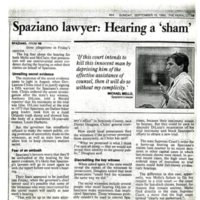