[Start of the first column]
Tallahassee – The lawyer for Joseph “Crazy Joe” Spaziano wants more time than a week to show why this client is innocent of the murder that has him scheduled for execution in two weeks.

Mello filed similar motions over the weekend to the state Supreme Court and plans to turn to the U.S. Supreme Court later this week.

But whether or not the courts give him an extension, Mello said he will not attend a hearing set for Friday because of the rush.

Spaziano, 49, is scheduled to die in Florida’s electric chair 7 a.m. Sept. 21 for the mutilation-murder of an 18-year-old Orlando woman in August 1973.

[start of the second column]
Late last week, the state Supreme Court ordered the lower court to hold the hearing by Friday. At the same time, the high court refused to postpone the scheduled execution.

At the heart of Spaziano’s appeal is Anthony DiLisio, who told jurors in Spaziano’s trial that Spaziano had taken him to an Altamonte Springs dump where the body of Laura Lynn Harberts was found.

Earlier this summer, DiLisio, who now lives in Pensacola, recanted his testimony, prompting Gov. Lawton Chiles to call off an execution scheduled for June and to order the Florida Department of Law Enforcement to investigate.

Last month, Chiles said the results of the FDLE investigation settled any doubts, and he signed a fifth death warrant.

Mello said if Friday’s hearing is not delayed and does not result in a stay of execution, he will file one final request for clemency to Chiles before the execution.

Also Monday, the state office charged under the law with representing indigent death row inmates filed a motion to the state Supreme Court asking for a stay for Spaziano and clarification of its role.

Mello said Spaziano has refused to allow the office to be involved, but the high court said Friday the state office was required to provide Mellow with assistance. 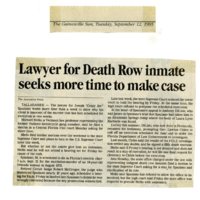