Joseph "Crazy Joe" Spaziano is left without representation in the upcoming trial against him. In his appeal to a death sentence, his lawyer, Michael Mello, stepped down in protest of this trial, arguing that is it a sham.

[Subheading, page one]
The move leaves Joseph Spaziano unrepresented only nine days before his scheduled execution.

[Caption on left picture] Joseph Spaziano’s scheduled execution for the 1973 murder of an Orlando hospital clerk is only nine days away.

[Beginning of column one]
TALLAHASSEE- With death in the electric chair nine days away, Joseph “Crazy Joe” Spaziano is caught in a bizarre fight over who will represent him.

He may have no attorney at all for a crucial hearing on his case at the end of the week.
Michael Mello, the Vermont law professor who has represented Spaziano this summer, refuses to attend the hearing, calling it “a sham.” He says he’ll file a Bar complaint against state lawyers if they try to intervene in the case.
On Monday, Spaziano turned away the lawyers who tried to visit him from the office of Capital Collateral Representative,
[End of column one]

Michael Minerva, the head of CCR, said he wouldn’t comment Monday on any “attorney-client communications.”

The attorney general’s office, representing the state’s interest in a death warrant against Spaziano, described the situation at typical as the clock ticks toward execution.

“This is just the predictable stall,” said Deputy Attorney General Pete Antonacci. “We see it before every execution.”

In the past, the Florida Supreme Court has halted an execution when a death row inmate was left without an attorney to adequately represent him.

But both Mello and CCR said they are not trying to create that situation.

In an affidavit filed Monday with the Supreme Court, Minerva wrote: “I must also address the distasteful suspicion that I or others at CCR in any way conspired with Mr. Mello or anyone else to precipitate a crisis in counsel for Mr. Spaziano in these proceedings. We did not.”

Court documents filed over the weekend indicate friction between CCR and Mello, who previously worked for CCR and represented Spaziano before moving from Florida in 1987:

Mello refuses to give CCR any of these boxes of files on the Spaziano case; Mello even filed a letter with the Supreme Court from Spaziano’s mother, Rose.

“My children and I are united in wanting you to represent my son Joe in his attorney,” she wrote. “We do not want the CCR to represent him.”

CCR acknowledges that it turned down an earlier request from Mello to help on the Spaziano case. “I was reasonably sure we would not agree on how to represent Mr. Spaziano,” Minerva wrote. “Mr. Mello was
[End of column three]
[End of page one]

[Beginning of column four]
suspicious and distrustful of CCR. We would not be able to cooperate in a way that co-counsel should and I feel that our disagreeing would not be in Mr. Spaziano’s best interest.’

Mello said in an interview Monday that he doesn’t feel CCR has adequately investigated Spaziano’s claims of innocence in the past and continues to have a conflict of interest in the case. He says CCR investigators tried to threaten and intimidate Anthony DiLisio, the witness who has recanted key testimony against Spaziano. CCR has denied allegations.

Both sides agree on one thing; Neither has time to adequately prepare for a hearing on the recanted testimony that is to be held Friday in Seminole County, where Spaziano was convicted and sentenced to death for the 1973 murder of Orlando hospital clerk Laura Lynn Harberts.

Both CCR and Mello have asked the Supreme Court to stay Spaziano’s execution.
[End of column four]

[Caption on right picture] Michael Mello, Joseph Spaziano’s attorney, has said he won’t attend a crucial hearing on the case at the end of the week. 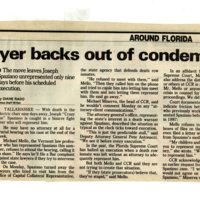 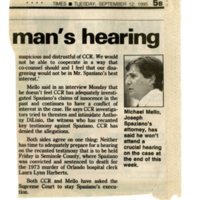