'Crazy Joe' is granted a reprieve

'Crazy Joe' is granted a reprieve

Joe Spaziano is granted a new hearing on his murder trial. Nine days before his execution date, the Florida Supreme Court has decided to hold Spaziano indefinitely to allow new evidence to be shown. Mello is kicked off the Spaziano case due Mello having issues following the court procedures and directions. The only witness to the murder trial, Tony DiLisio, has retracted his testimony linking Spaziano to the murder.

[Start of the first column]

The Florida Supreme Court issued an indefinite stay for condemned biker "Crazy Joe" Spaziano Tuesday --- nine days before his scheduled execution. Spaziano, who turned 50 on Tuesday, was visiting with his mother and sister on Death row when the news came in. He had already shaved his head in preparation for his death date with the electric chair a week from Thursday.

"His overriding emotion was relief," said his attorney, Mike Mello, a volatile Vermont law professor. "But I think it's more the absence of terror and fear than the presence of anything like joy."

The Supreme Court justices set a Nov. 15 deadline for a hearing on new evidence in the 20-year-old murder case.

Tony DiLisio, the state's star witness in the 1976 murder trial, recanted his testimony this summer, saying he lied when he testified Crazy Joe showed him the body of Laura Lynn Harberts at an Altamonte Springs dump in 1973. Harberts was a a hospital records clerk. DiLisio, then 16, was the only witness to link Spaziano to the crime.

The justices also kicked Mello off the case, citing his "flagrant disregard of this Court's procedures and directions."

[Start of the second column]
[Image with caption] DEATH ROW: Joseph Spaziano was to be executed Sept 21. [End Image Caption]

A dispute between Mello and the CCR, as it's known, is at the heart of Tuesday's stay of execution.

The decision comes four days after the justices refused to issue a stay, and ordered the evidentiary hearing to take place Friday. Last week the court ordered Mello to work with the CCR, which has represented Spaziano in the past.

But Mello refused. After a flurry of motions where both criticized each other, the justices said it was obvious Spaziano [End page one]


[start of the third column]
needed more than a few days to sort out who is representing him.

"We envisioned a spirit of cooperation between CCR and Mello that would guarantee the best representation for Spaziano," the justices said in Tuesday's opinion.

"Unfortunately, the events of this past weekend make it clear that such cooperation does not exist."

Catching up
Marty McClain chief assistant at CCR, said his office has a lot of work to do on the case. They represented Spaziano until June. He said their first priority is to get a copy of a secret report on DiLisio that was prepared by the Florida Department of Law Enforcement at the request of Gov. Lawton Chiles.

CCR investigators were questioned by the FDLE, and they told the agency about their unsuccessful attempts to get a statement from DiLisio. It is because of that cooperation with the FDLE that Mello said the CCR should not be permitted to represent Spaziano.

Chiles stayed Spaziano's last execution date after DiLisio told The Herald that what he said in the murder trial and in a rape trial wasn't true.

But after reading the FDLE report, Chiles issued another
[end of the third column]

[start of the fourth column]

death warrant, saying he was convinced DiLisio is lying now, and was telling the truth at the trials. Chiles has refused to release that report, citing the need to protect witnesses who were guaranteed anonymity by the FDLE.

"Obviously, this report contains statements of witnesses with material information," McClain said. "We need to know what that is. If the the information indicates Mr. Spaziano is innocent, we're entitled to that. If it's adverse to Mr. Spaziano, we need to know if that person is to be believed."

Chiles blasts lawyer
Just as the Supreme Court was issuing its decision Tuesdays afternoon, Chiles was holding a
[end of the fourth column]

[start of the fifth column]

[Quote text box above from Mello] 'His overriding emotion was relief. But I think it's more the absence of terror and fear than the presence of anything like joy.' Mike Mello, Joseph Spaziano's attorney. [end quote box].

press conference across the street. He strongly criticized Mello.

But Mello said he accomplished what he set out to do---earn a stay and more time to investigate the new twists in the case. And he said he will not leave the case, though he acknowledges he needs help.

"My top priority right now is to get a major Florida law firm willing to sign on as a pro bono counsel," Mello said. "We need to get that secret FDLE report. And we need to track down every piece of paper in all of the cases they've tried to pin on Joe."

"He remains convinced, waveringly so, about this case," Sachs said. 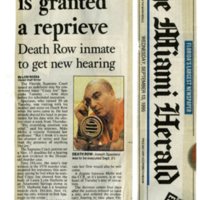 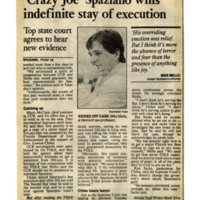