Mike Mello Joseph Spaziano's lawyer makes an attempt to get a stay of execution for Spaziano. Mello did this by not attending the "Last-Chance hearing" to defend Spaziano, leaving him without representation, and forcing the postponing of his execution. This was done after the testimony of a key witness came into question.

[Subheading]
The Supreme Court orders a hearing on new evidence after a Death Row inmate's attorney refuses to show.

[Start of the first column]

TALLAHASSEE- The Florida Supreme Court on Tuesday halted next week’s scheduled execution of 20-year Death Row inmate Joseph Spaziano for a reason that characterizes the troubling case: His attorney refused to go ahead with a last-chance hearing.

The decision to indefinitely postpone the execution and order a hearing about new evidence was the latest in a case centering on testimony that was given by a troubled teenager under hypnosis --- no longer allowed in courts.

The case has been marked by brinkmanship,

The ruling Tuesday nullifies what was Spaziano’s fifth death warrant --- the most of any living Death Row inmate. And it did so on the 50th birthday of the Outlaws motorcycle gang leader known as Crazy Joe.

Spaziano, also serving a sentence for rape, was convicted of the 1973 murder of hospital records clerk Laura Lynn Harberts, 18. Her mutilated body was found in a trash dump in Seminole County.

Harberts’ father said Tuesday that his family has had to cope with the case for many years.

[end of the first page]

[start of the second page]

“There is a lot of suffering and anguish for other people.”

The key witness in the trial was teenager and Outlaw groupie Anthony DiLisio. DiLisio testified that Spaziano had bragged about killing women and took him to see Harberts’ body.

But the testimony was induced by hypnosis because DiLisio could not provide police with the details they sought to make their case.

After several appeals and three vacated death warrants, Chiles ordered Spaziano’s execution in June. He withdrew the order after The Miami Herald quoted DiLisio as saying that he made up the testimony at the urging of police.

Chiles ordered Florida Department of Law Enforcement investigators to review the new information. He kept their findings secret but said he had no doubts of Spaziano’s guilt and signed a fifth death warrant last month.

When the court refused to stay Spaziano’s Sept. 21 execution last week, it ordered that a fast-track hearing on DiLisio’s recanted testimony be held in Seminole County by Friday.

Mello, a professor at a small law school in Vermont and a former assistant public defender in West Palm Beach, said he refused to attend Friday’s hearing because he didn’t have enough time or money to prepare.

In its ruling Tuesday, the court declared that Mello had acted with “flagrant disregard” for court procedures and had, therefore “effectively withdrawn” from the case. It ordered him to turn over his files to the state agency that usually defends Death Row inmates and ordered the hearing on DiLisio’s recantation by Nov. 15.

Mello said he was “extremely relieved Joe will not be executed on schedule” but insists he has not left the case. He said he will try to find a law firm to

[start of the fourth column]
provide him the backing to continue.

He gave Spaziano the news by phone Tuesday.

“He’s been through this drill so many times,” Mello said, noting Spaziano had shaved his head in preparation for the electrocution.

The opinion takes Chiles’ office out of the process until the lower courts meet over the issue of the recanted testimony.

After the opinion was released, Chiles general counsel Dexter Douglass said his office had been ready for the Spaziano case to end.

“This matter’s got to come to a closure,” Douglass said. “The fact that he stayed it off 22 years is no reason not to enforce the death penalty.”

Chiles’ office was critical of Mello last week over a profanity-laced memo in which he outlined his case strategy. Chiles, before the opinion Tuesday, said Mello’s latest tactics were not “serving justice.”

Michael Radelet, a University of Florida professor who worked with Mello and wrote a book documenting executions of innocent people, said Mello knows he could be sanctioned for his actions but he “played a game of chicken” for his client.

Radelet noted that Chiles and his predecessor, Bobb Martinez, are the first governors this century not to have granted clemency to anybody on Death Row.

He said that they are not privy to what Chiles gathered in his brief investigation.

One part of the investigation includes a video-taped interview with FDLE agents sent by Chiles in which DiLisio insists he had never seen the dump site until police took him there years after the crime and in preparation for the trial.

The Orlando Sentinel reported that Chiles reviewed a statement taken by FDLE from someone who DiLisio told him about the trip to see the body before he had talked to police and others who said Spaziano bragged to them about the murder.

Under Clemency laws, Chiles is allowed to keep the information secret, and Douglass said he will continue to do so. He has said witnesses fear retribution by Outlaws members.

The Associated Press contributed to this story. 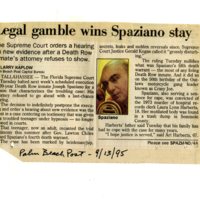 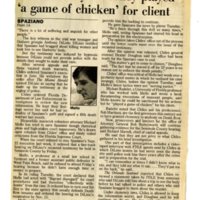