Joe Spaziano, nicknamed "Crazy Joe" was granted a stay of execution from the Florida Supreme Court.. The court ordered a new hearing, that will be held no later than November 15th. Mr. Spaziano has refused to see a state appointed attorney, after his original attorney Michael Mello's actions were deemed unethical by the justices.

The reprieve resulted not from courtroom maneuvers or media pressure, but from a dispute over who should represent the biker convicted in 1976 of the torture-murder of an Orlando women.

And the prize could be temporary: Justices issued an indefinite stay but a hearing that holds all of Spaziano's chances for a new trial must be held no later than Nov.15.
"I'm relieved for Joe and his family," said Vermont law professor Michael Mello, the lawyer removed by the court. "But this isn't over by a long shot." Dexter Douglass, Gov. Lawton Chiles' general counsel, said the court had no choice but to grant a stay, given Mello's refusal to attend a hearing that had been scheduled for Friday in Sanford or to cooperate with the state death-penalty lawyers authorized to take over Spaziano's defense.
"This is a victory by the improper, unethical and unprofessional stand of an alleged professor," Douglass said. "He did such a bad job that his client won out."

The ruling issued on the 20th of Spaziano's murder indictment and the biker's 50th birthday, means he will not die under his fifth death warrant for the 1973 murder of Orlando hospital clerk Laura Harberts.

Spaziano had been scheduled to die Sept. 21.
Art Harberts, father or the 18- year-old victim, said he was disappointed by the stay but optimistic about the final outcome.

"In the long run, he's going to have to face up to all this." Harberts said of Spaziano.
In the ruling on seven motions filed by both Mello and the state's Office of Capital Collateral Representative, justices said the bitter disagreement between the lawyers jeopardized Spaziano's chances for adequate counsel.

Justices sharply criticized Mello, who had refused orders to cooperate with CCR. The lawyer had said the agency had botched the Spaziano case when it handled it before.

"In view of Mello's actions," the justice wrote, "we find that he has effectively withdrawn from representing Spaziano."

Mello said he would not withdraw and would appeal the ruling to the U.S. Supreme Court. He also said he has not decided whether to give the case files to CCR while he appeals and looks for a private law firm to take on the case.
Spaziano's hopes rest on Tony DiLiso, a witness from the 1976 murder trial who now says the biker never took him to see the bodies of Harberts and another women at an Altamonte Springs dump. Last week, the court ordered the Seminole Circuit Court to hold a hearing Friday in Sanford on DiListo's recantation.

Now that the hearing will be delayed so prosecutors have time to prepare, Three of the justices - Leander Shaw, Gerald Kogan and Harry Lee Anstead- questioned whether even the Nov.15th deadlone gives lawyers enough time to adequately study the complected case. Spaziano refused to meet with a CCR attorney Monday. His mother, Rose, wrote to Mello asking him to not allow CCR on the case.

The justices said they understood Spaziano's distress but noted that Mello cannot afford to represent the biker and has little trial court experience.
[end of page two] 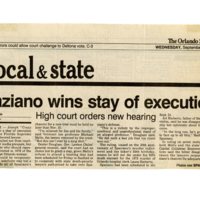 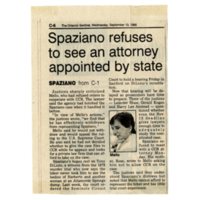