Spaziano gets stay of execution

Spaziano gets stay of execution

The judge for Joe Spaziano case gave Joe a delay his execution because of his lawyer did want to cooperate with the state attorney. Joe Spaziano was supposed to be executed for the murder of Laura Lynn Harberts who was 18 on August 1973 who was found dead and mutilated.

[Heading]
Spaziano gets stay of execution

[subheading]
The court grants the indefinite stay after his attorney refuses to cooperate with the state.

[BEGINNING OF PAGE ONE]
The Gainesville Sun-Wednesday, September 13, 1995, Joseph "Crazy Joe" Spaziano cannot be executed next week because his attorney has refused to cooperate with state lawyers assigned to the case, the Florida Supreme Court said Tuesday.
In giving Spaziano an indefinite stay of execution, the court canceled his fifth scheduled trip to Florida's electric chair. The unsigned opinion issued on Spaziano 50th birthday.
Spaziano is condemned for the August 1973 mutilation-murder of Laura Lynn Harberts, 18, an Orlando hospital records clerk.
The execution had been set for 7 a.m. Sept 21.
Harbert's father said his family has had to cope with the case for many years.
"I just feel in the end it's going to be a long time, but I hope justice is served," Art Harberts, 67, said. "There is a lot of suffering and anguish for other people."
Harberts, who lives in the Jacksonville area, said he attended Spaziano trial and had no doubt for his guilt.
Michael Mello, the Vermont law professor who has been representing Spaziano for free and maintained his clients is innocents, said he was relieved by the stay.
The Supreme Court said a stay was required because Mello has refused to cooperate with the state regency that represents indigent Death Row inmates, despite an order from the court on Friday to do so.
"The fair administration of justice in Florida cannot proceed with such flagrant disregard of this court's procedures and directions," the Tuesday opinion reads.
The high court on Friday ordered a central Florida trial court to hold a hearing into the merits of Spaziano appeal by the end of this week. Mello said he would not attend because the justices didn't give him enough time to prepare.
In Tuesday's ruling, the court said that decision by Mello indicated he had effectively withdrawn as Spaziano's attorney.
The court said it was aware Spaziano is opposed to have the office of Capital Collateral Representative, the state agency that represents Death Row inmates, involved in his case.
See EXECUTE on page 2B
[END OF PAGE ONE]

Continued from page 1B
"Spaziano is faced with a choice" the court wrote, saying it was him to be represented by CCR, a competent volunteer attorney or no one.
Chief Justice Stephen Grimes and Justice Ben Overton, Major Harding and Charles Wells supported the majority opinion, which ordered a hearing into Spaziano's appeal by Nov. 15.
Justice Lender Shaw, Gerald Kogan and Harry Lee Anstead said they agreed a stay was necessary and that Melo was off the case. But the three justice said they didn't think a deadline should be set for the hearing.
In Tuesday's ruling, the court ordered Mello to turn the case files ordered Mello to turn the case files over to CCR and directed CCR to act as Spaziano's counsel "without Mello's assistance or inteference."
Mello said he hoped to be able to stay on the case by putting together a defense team that includes him as well as a major Florida law firm willing to donate donate its time.
[END OF PAGE 2] 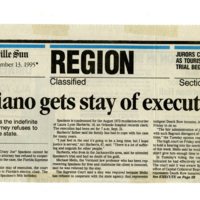 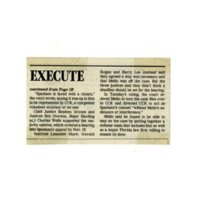