This newspaper was describing how volunteer lawyer programs are being shut down due to lack of funding. There are other programs besides CCR that are trying to help prisoners on death row be represented in court. There has also been a dramatic increase in the amount of inmates who need a lawyer for criminal punishment charges in Florida.

[Heading]
Operation to shut its doors this month

“We’re boxing it up and moving it out,” said Jennifer Greenberg, co-director of the Volunteer Lawyers’ Resource Center in Tallahassee.

The organization, created in 1988 to assist death row prisoners in their ap-peals, is closing its doors following a House of Representatives vote to elimi-nate federal funding for the VLCR and 19 similar organizations throughout the country.

The cuts are part of the 99-page House Appropriations Bills for the Departments of Commerce, Justice, and State, the ju-diciary and related agencies for fiscal year 1996.

“None of the funds provided in this Act shall be available for Death Penalty Re-source Centers or Post Conviction Defendant Organizations,” the bill, destined to become law, says. “It has not passed the senate yet, but our understanding is that there will be absolutely no problem with that occ-uring,” Greenberg said, adding that the Administrative Office of the Federal Courts has Directed the Resource Center to prepare to shut its doors on September 30.

The news of the Resource Center’s closing came as a blow to Florida’s Office of the Capital Collateral Representative, which serves as counsel for all Florida death row prisoners not otherwise represented.

Saying it has to many cases and too few lawyers, CCR Michael Minerva told the Supreme Court in a petition for re-lief that the center’s closing “threatens to send the system into chaos because an already overburdened CCR could not possibly absorb the sudden addition of other clients.”

Minerva said out of the approximately 350 people on death row in Florida, his office represents 141 of them, with an-other 25 who are eligible for representation but have yet to be assigned counsel. The Resource Center and its volunteers represent another 50 prisoners, he said. A couple of others are represented by volunteers not associated with the Resource Center and the balance of death penalty cases are still on direct appeal.

With the end of the Resource Center, the responsibility for finding lawyers for those sentenced to death again will ultimately fall on the Bar, president who sits on the Resource Center’s board of directors. Rinaman organized the Bar program in the mid-1980s that recruited law firms to handle death penalty appeals, and was instrumental in establishing the VLRC and CCR.

”I think the Bar is going to be called upon to play a role,” Rinaman said. “The question is, what role?”

Greenberg said the VLRC has already laid off most of its 23 employees, which includes six lawyers and four investigators, along with paralegals and other support staff.

“We are down to just those who will physically close the operation,” she said.

[Quote] “It is really frightening what we as citizens are going to allow to happen to our condemned.’- Jennifer Greenberg VLRC co-director. [End quote]

The Resource Center also has notified the Governor’s Office of its closing, and the center’s present inability to represent or assist in the representation of anyone under a death warrant.

“Our board has told us to stop taking new cases, stop investigating, stop doing anything other than what we need to do to close,” Greenberg said. “We have reached a point where in order to fulfill our exiting obligations we have to focus on that and not do anything new.”

Greenberg said VLRC is working to transfer ongoing cases and trying to ensure former clients ”have something approaching effective representation in the future.”

With the closing of the Resource Center, Greenberg said she thinks post-conviction for Florida death-sentenced inmates with be thrown into turmoil.

“I think it is particularly distressing in Florida where we have tried very hard to ensure effective representation and ensure there is some order in the pro-gress,” Greenberg said.

[Beginning of Page #2]
a rate far exceeding that in any prior years,” the petition said. “Whereas CCR’s capacity for accepting affirmed death cases was capped at 26 per year, mean-ing a filing rate of one 3.850 motion ev-ery two weeks, the number of affirmances by this court in calendar year 1994 rose to 46. As those cases move into post-con-viction, they are again overloading CCR’s staff at its present funding level.”

The Bar’s
Rinaman chaired the Bar committee in the 1980s that was asked by the Federal/State Judicial Council to find volunteers to handle appeals for inmates awaiting execution.

“For about three years the Bar carried the ball single-handedly,” he recalled.

In 1985 the Florida legislature created CCR to provide direct representation to death-sentenced individuals in post con-viction proceedings and the Volunteer Lawyers’ Resource Center was created in 1988 in an attempt to alleviate a case backlog.

[Quote] ‘I think the Bar is going to be called upon to play a role. The question is, what role?’- James Rinaman, Former Bar President. [End Quote]

“Over the years we have developed a program that is barely adequate, and now without the Resource Center we will be back in a situation where we don’t have an adequate program,” Rinaman said.

Supreme Court Justice Ben F. Overton asked the Board of Governors at its February meeting to help find lawyers to take cases that can’t be handled by CCR Rinaman expects the Bar to again hear from the Supreme Court to set up a meeting to determine what to do next.

“It is not going to be an easy task, but I’m sure we are all up to it,” Rinaman said. “And in the name of going back to true federalism, maybe we will figure out a way to do it.”
[End of Page #2]

[Start of Page #3]
sentation for inmates seeking collateral review in cases where CCR has a con-flict, or where CCR lawyers are over-loaded. The center also recruited volunteers to represent death row inmates in post-conviction matters. As an inducement to attract volunteers, the Resources center provided research, con-sultation and investigation services.

“I have relied, totally, on the investigative and logistical resources of the Florida Volunteer Lawyers’ Resource Center,” Said Vermont law professor Michael Mello, who has represented several death row inmates in Florida, including Joe Spaziano, who is currently under a death warrant. ”The key to effective capital appellate work is not being a good researcher on case law; the key is being a good gumshoe investigator of fact–or being able to rely on the investigative skills of a law office like VLRC.”

Greenberg said for a decade the legal community in Florida had an understanding that the people sentenced to death must have lawyers.

“It really is a very sad day when not only are we faced with the prospect of having unrepresented people under death warrant, but we are really losing that incredible opportunity to bring in sole practitioners and bring in civil law-yers,” Greenberg said. “It really is fright-ening what we as citizens are going to allow to happen to our condemned.

CCR Minerva doesn’t know how many death row inmates will wind up without representation because of the closing the Resource Center.

“We were already staggering under the load of the combination of the one-year time limit for filing collateral appeals, the unprecedented number of affirmances in 1994 by the Florida Supreme Court, and now this on top of it,” Minerva said. “This is the third major occurrence that has really affected the way we provide services.”

“For me to try to tell them to stay the course when I don’t have anything to of-fer is not really very helpful,” Minerva said. “I think each of those volunteers is going to have to assess their own situa-tions and see if they can stay or not.”

The agency also asked the court to find that CCR is not fully funded and to stay its orders for designating council and fil-ing Rule of Criminal Procedure 3.850 motions in specific cases.

The supreme Court Committee on Post- Conviction Relief found that for the process to work, counsel had to be assigned quickly following the end of direct appeals. The committee recommended that counsel be appointed within 30 days after the last direct appeal, and that a one-year limit be placed on filing collateral appeals, assuming that CCR would be funded to meet that deadline.

The rule went into effect January 1, 1994, and the court said it would review the rule this year.

CCR operations were boosted by the legislature in 1993, based on an estimate of handling around 24 new cases per year.

The problem, the CCR said, is that while the office budget was increased 50 percent, the client caseload has increased 69 percent and that figure was set to rise to 76 percent when five more cases were assigned.

And the caseload continues to be above projections.

”[A]fter January 1, 1994, death sentences were affirmed on direct appeal at 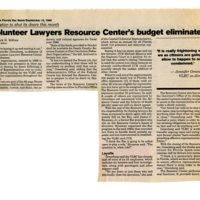 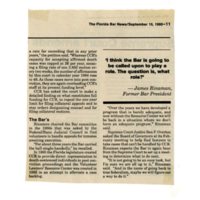 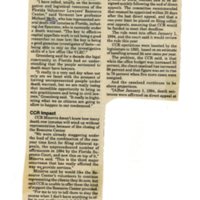