“Crazy Joe” Spaziano receives a last-minute stay of execution on his 50th birthday September 25, 1995. In 1975 police charged Joe Spaziano with the 1973 rape-torture slaying of 18-year-old hospital clerk Laura Lynn Harberts. Jurors found Spaziano guilty of all charges but recommended life in prison however, Judge Robert McGregor overruled their ruling and sentenced Mr. Spaziano to death citing a previous rape conviction. Professor Mello and other attorneys raised questions about the case and challenged the ruling in court winning multiple stays of execution.

[Text above title]
HAPPY BIRTHDAY, MR. SPAZIANO
[Title]
Court Gives ‘Crazy Joe’ 11th-Hour Reprieve
[subtext below title]
A lawyer makes his case in the press, convincing hard-bitten editors of client’s innocence.
BY LINDA GIBSON
SPECIAL TO THE NATIONAL LAW JOURNAL
[start of the article]
CONDEMNED PRISONER Joseph Spaziano gambled that the press could keep the state from executing him. So far, he’s won. On Sept. 12, his 50th birthday, the Florida Supreme Court granted him a stay of execution and ordered a lower court hearing to be scheduled by Nov. 15. He was to have been electrocuted Sept. 21.
His pro bono attorney, Vermont Law School Prof. Michael Mello, bet Mr. Spaziano’s life on resourceful reporters and eloquent editorials. Sparked by a column Professor Mello wrote for the Miami Herald, the newspaper interviewed the main witness against Mr. Spaziano. The witness told reporter Lori Rozsa that he’d been a drug-addled delinquent teenager who had concocted his story at the prodding of investigators during hypnosis sessions. Florida Gov. Lawton Chiles issued a stay of execution 12 days before the inmate’s June 27 date with Old Sparky. But on Aug. 24, the governor reversed himself and issued a fifth death warrant based on the confidential statements of newly found witnesses whom he has refused to identify publicly.
The odds that Mr. Spaziano would be this latest warrant were as slim as the evidence that put him on death row 19 years ago.
In 1975, police charged “Crazy Joe” Spaziano, a member of the Outlaws motorcycle gang in Orlando, with the 1973 rape-torture slaying of 18-year-old hospital clerk Laura Lynn Harberts. Her remains were found in a rural garbage dump along with those of another still-unidentified victim. The prosecution’s sole evidence was the testimony of Anthony DiLisio, who said Crazy Joe took him to the dump to view the corpses and described how he had tortured the girls by showing them pieces of their bodies that he had sliced off. State v. Spaziano, 393 So.2d 1119 (Fla. Sup. Ct. 1981).
Sensational though it was, even prosecutor Claude Van Hook acknowledged Mr. DiLisio’s testimony was the state’s total case against Mr. Spaziano. “If you don’t believe Tony DiLisio,” he told the jury at the 1975 trial, “then find this defendant not guilty in five minutes.”
Jurors deadlocked twice in six hours. Finally, they came back with a guilty verdict but recommended life in prison. Seminole County Circuit Court Judge Robert McGregor overruled them and sentenced Mr. Spaziano to death. Jurors didn’t know, the judge told reporters later, that the defendant had a previous conviction for rape.
Harbored a Grudge
They also didn’t know, however, that Mr. DiLisio’s testimony had been elicited by hypnosis sessions with a practitioner whose work in other cases had been questioned. In 1985, Florida banned testimony based on hypnosis as unreliable but failed to make the ban retroactive. Mr. DiLisio also had made heavy use of hallucinogenic drugs as a teenage and had harbored a grudge against Mr. Spaziano over the latter’s relationship with his stepmother, defense lawyers say.

Professor Mello and other attorneys raised these points during years of stay applications and briefs.

“None of that made the slightest difference,” he said, citing rules that prohibit state and federal courts from reviewing evidence that wasn’t raised at trial. “Because of all this, no court has ever ruled on the merits of Mr. Spaziano’s evidence demonstrating his innocence.”

“People thought I’d lost my mind. The Herald is an extremely conservative institution,” said Professor Mello. “They’re in favor of the death penalty. But I figured if I could convince the Herald, I could convince anyone with an open mind.”
[End first image text]
[Start second image]
[small text on the right side of the image]
AP/WIDE WORLD PHOTOS
[Text below image]
Turned 50: The stay came on Joseph Spaziano’s birthday.

[text in box]
CASE AT A GLANCE
Venue: Florida Supreme Court
CONDEMNED PRISONER: Joseph “Crazy Joe” Spaziano
DEFENSE ATTORNEY: Prog. Michael Mello of Vermont Law School
SUMMARY: Mr. Spaziano, scheduled for execution Sept. 21, was given another reprieve when the Florida Supreme Court ordered a hearing into the recantation of the main witness against him. The witness told a reporter that he had concocted his testimony at the prodding of investigators.
[End second image]
[Start third image]
Mr. Miller’s skepticism as a reporter is legendary. In 1976, he won a second Pulitzer Prize for his reporting on the case of Wilbert Lee and Freddie Pitts. They’d spent years on Florida’s death row for a murder that hadn’t committed, until someone else confessed. After Mr. Millers 1875 book “Invitation to a Lynching,” he was deluged with requests from inmates and attorneys who wanted him to look at their cases, too. He said he never expected to see another one like Pitts and Lee.
Read Transcripts
But Mr. Miller agreed to take a phone call from Professor Mello after the lawyer enlisted the aid of a friend who approached Mr. Miller’s daughter. The editor agreed to read a chapter about the Spaziano case in a book Professor Mello was writing on death row representation. Then Mr. Miller asked to see the trail transcript, police reports and tapes of Mr. DiLisio’s hypnosis sessions. On Friday afternoon of Memorial Day weekend, Mr. Miller dropped it all off with another legendary skeptic, investigator Warren Holmes of Holmes Polygraph Services Inc., in Miami.

Mr. Holmes has worked with the Herald for 30 years. He’s participated in such cases as the assassinations of Martin Luther King Jr. and President Kennedy and is known for his work on the Pitts and Lee case.

He wasn’t happy about Mr. Miller dumping a load of papers on him just before a holiday weekend, but he expected to spend no more than half an hour on them before concluding that Mr. Spaziano was guilty. More than 10 hours later, however, the investigator called Professor Mello. “He told me that he had reviewed between 1,200 and 1,400 transcripts in his time, and he had thought that three men were innocent: Pitts, Lee and Joesph Spaziano,” said Professor Mello.

Mr. Holmes next went to the Herald: “I told them there was something radically wrong with the case.”
Mention in the records of hypnotist Joe B. McCawley set off bells. Mr. McCawley had helped convict Messrs. Pitts and Lee through a dramatic, but suspect “hypnosis” session of a witness conducted right in the courtroom. Psychologists and psychiatrists have viewed Mr. McCawley’s sessions with Mr. DiLiso with skepticism.

“We found the hypnotist is a guy with a very checkered record,” said Herald state desk editor John Pancake. “The key thing you can see looking at the file was [Spaziano] was convicted on hypnotically enhanced testimony. That’s no longer admissible.”

Mr. McCawley now is director of the Ethical Hypnosis Training Center in Orlando. Reacting to comments about his work in the case, he said “I would expect that. Ignorance breeds a lot of contempt.”

Wrote Column
But before the paper would act, it insisted that Professor Mello write an article about the case. Editors also dictated that the lawyer had to mention within the first few paragraphs that his 70 clients on death row, Mr. Spaziano was the only one he thought was innocent. Professor Mello resisted until the paper delivered an ultimatum: no column, no Herald investigation.
Professor Mello capitulated. Mr. Miller edited the column and then took an extraordinary step. Instead of treating the story competitively, he arranged to have it run simultaneously June 4 in the Herald, the St. Petersburg Times and the Orlando Sentinel. He also called syndicated columnists James J. Kilpatrick, who responded with a column published June 8 calling on Governor Chiles to issue clemency.
Meanwhile, Herald reporter Ms. Rozsa found Mr. Dilisio, now a sober, 38-year-old part-time preacher, in Pensacola. On her third attempt to talk to him, he let her in and spilled his guts.
He didn’t remember Crazy Joe taking him to the dump.

He didn’t remember the hypnosis, the trail and his testimony. “How do I know what I said back then was reliable? Especially if it came out under hypnosis,” he said. Mr. DiLisio’s recantation, published June 11, fell like a bomb on the seemingly unalterable course of events that follow the signing of a death warrant. Said Mr. Pancake. “We were really stunned.”
The Herald followed up with a June 13 editorial calling on Governor Chiles to halt the execution. On the 14th, it published a detailed article by Associate Editor Tony Proscio that included excerpts from Mr. DiLisio’s hypnosis sessions. “I’m not crusading to save the life of this one guy,” Mr. Proscio said. “This is about procedure, justice and the integrity of the death penalty.”

On June 15, Governor Chiles issued a stay and ordered the Florida Department of Law Enforcement to investigate. In addition to interviewing Mr. DiLision, agents found new witnesses who claimed Mr. DiLisio had talked about viewing the bodies even before he was hypnotized and others who said Mr. Spaziano had admitted the killings to them. Agents promised them confidentially because they feared retaliation from the Outlaws. On that basis, and with the help of a recently passed and little-known exemption from Florida’s tough public records laws, the governor sealed the report and issued a fifth death warrant.

While reporters try to get hold of the secret report, Professor Mello and public defense lawyers here are arguing over who will represent Crazy Joe for what might be his final hearing.

What happens, he’s decided not to take his client’s case back into federal court, a most unusual tactic that dismays his associates. “What we must do is maximize the pressure on Chiles,” he said. “That means, getting access to the report and it’s underlying materials and exposing them as the product of a whitewash with a foreordained conclusion.

“During my 12 years as a capital post-conviction litigator, I swore I would never try any of my cases in the media. Now, I swear I will never try one in court.”
[End third image] 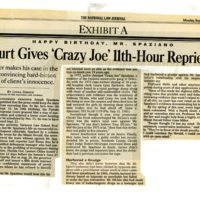 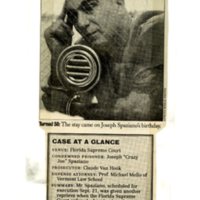 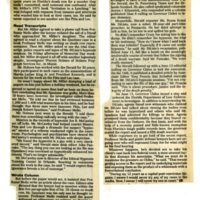