A key witness in the trial of Joseph Spaziano, for the murder of Laura Harberts, changed his statement. Spaziano now has a new legal team and the presiding judge has removed himself in fear of impartiality. Spaziano's execution has been postponed and a new trial will take place in the near future.

[heading]
Spaziano gets new lawyers, judge
By Beth Taylor
Of the Sentinel Staff

Sanford- Joseph “Crazy Joe” Spaziano, who won a stay of execution after a key witness changed his story, will have a new law firm and a new judge at a November hearing.

Holland & Knight, the state’s largest law firm, has taken over defense of the biker convicted of the 1973 killing of Orlando hospital clerk Laura Harberts.

Meanwhile, Robert McGregor, the retired judge who presided at Spanziano’s 1976 trial, has removed himself from the case after defense lawyers raised questions about his impartiality.

The hearing, called to evaluate whether Spaziano deserves a new trial, has been assigned to Seminole Circuit Judge O.H. Eaton, a 52-year-old former prosecutor in his second term.

Spaziano, 50, was scheduled to die Sept. 21 under his fifth death warrant, but the state Supreme Court postponed the execution because witness Anthony DiLisio now says he lied at the trial in Sanford nearly 20 years ago.

DiLisio now denies that Spaziano took him to an Altamonte Springs dump where he saw the mutilated bodies of Harberts and another woman.

The Supreme Court ordered the trial court to hold a Sept. 15 hearing. But Spaziano’s lawyer, Vermont law professor Michael Mello, refused to attend or to turn records over to the state’s Office of Capital Collateral Representative, which represents indigents on death row.

Mello said he had too little time to prepare and did not trust the CCR.

The high court threw Mello off the case, rescheduled the hearing, and asked McGregor to preside. But the CCR asked for a new judge, citing McGregor’s public comments about the case in recent newspaper articles.

John Dean Moxley, chief judge of the Seminole-Brevard circuit, reassigned the case after talking with McGregor.

“We talked it over, and he thought it was a good motion,” Moxley said Wednesday.

Holland & Knight was Mello’s second choice to replace him as Spaziano’s lawyer. Miami criminal lawyer Jeff Weiner signed on last week, but withdrew from the case one day later after a disagreement with Mello.

“We think everyone, even people who are despised by many people, are entitled to due process,” said Sandy Bohrer of Holland & Knight, which will represent Spaziano at no charge.

Bohrer said Mello agreed to turn over his files. Mike Griffin of the Sentinel staff contributed to this report.

Mike Griffin of the Sentinel staff contributed to this report. 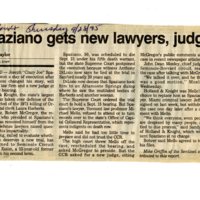