This is an article was written by Michael A. Mello in 1977 for the College of Mary Washington's student run newspaper, called The Bullet. Mello is arguing that the United States did indeed commit war crimes during our time in SouthEast Asia, during the Vietnam war, and that Secretary of State Dean David Rusk is the one responsible for those crimes, therefor should be held accountable. Throughout this article he often compares the "war crimes" the U.S. committed to those committed by Germany during the Holocaust. Because no one took responsibility, or even admitted that the actions were comparable to war crimes, he believes all the blame lays on David Rusk for he was the Secretary of State at the time, and was the one responsible for giving the orders.

President Woodard was correct when, last Sunday at the DVIR address, he said that “Secretary of State Rusk guided and administered the foreign policy of our nation,” between 1961-1969. No matter what direction that foreign policy took and no matter what one’s assessment of it, Rusk bears a large measure of responsibility for it. The major focus of American foreign policy effort, attention, and resources for the last four years of Rusk’s term was concentrated upon war in Southeast Asia: if certain of the policies were “criminal,” as defined by universal morality as embodied in international law, then the Secretary of State must surely bear a measure of liability. I believe that at least five policies embodied by the U.S. in Vietnam were criminal by these two standards.

1) The massive destruction of crops by the use of chemicals. Rusk claimed time and again that only military targets had been targeted for destruction in Vietnam, yet the Defense Department reported that 505,000 acres of crops and 4,560,000 acres of forest were defoliated between 1962-1968. Studies concluded that these chemicals caused birth defects; further, the destruction of families’ livelihood often drove them into wretched refugee centers. 2) The use of “search and destroy” missions that entailed, in effect, the total destruction of entire villages. 3)”Free fire zones.” 4) The almost universal use of torture on prisoners of war, suspected enemy sympathizers and dissidents in general. 5) The aerial bombing of civilians.

Rusk stated (in Prof. Fickett’s class), he had always been skeptical about the bombing; Rusk further said that it was his responsibility as Secretary of State to carry out the decisions of the president, even if he personally disagreed with those decisions. He claimed, in effect, that he was “just following orders”: a concept which was specifically denied by the Nuremburg Tribunal. Rusk said that he had always been skeptical about the bombing. But he was never “skeptical” enough to write any memorandums or to initiate any correspondence to that effect—as his colleague George Ball continually did. His “skepticism” did not prevent him from defending the B-52 raids before the Senate Foreign Relations Committee in 1966. And he was never so “skeptical” about the bombing that he resigned his post in protest—as his colleague Eric Goldman did.

It is perhaps true that Rusk never signed any orders calling for the bombing of civilians; he never formally ordered the torture of prisoners. But he also never protested the systematic and widespread use of war crimes, although his position as Secretary of State would have given his dissent a particular power. It is absurd to suggest that he was unaware of them, for they were regularly reported by firsthand observers in such publications as the NEW YORK TIMES, the LONDON TIMES and the WASHINGTON POST. It is difficult to visualize a Secretary of State failing to read these publications. Perhaps Rusk doubted the accuracy of the reports. But why did he not then initiate his own investigation as his subordinates had urged? Certainly he was aware of the bombing and defoliation, and it is difficult to believe that he is unaware of the rest. The conclusion is inescapable: although he was aware (at the very least) of the systematic policies of war crimes being practiced in Vietnam, he chose to ignore them.

Rusk said in March that, “It isn’t a comfortable easy war. It is a dirty, mean struggle carried out without regard for ordinary norms of conduct by the Vietcong.” Rusk used this logic to justify search and destroy missions, free fire zones, and defoliation; he completely evaded inquires on the use of torture. Because the VC did it, we could do it. But if we use the same tactics as the enemy, are we not then as bad as the enemy? Rusk himself called the tactics of Vietnam “brutal,” “inhumane,” “criminal.” If we emulate those tactics, what does that make us?

If Dean Rusk and his fellows in the highest councils of government are not the ones liable for this policy of war crimes, then who is? Is the infantryman who was drafted against his will, given 90 days of training and airlifted into a terrifying environment in which everyone but his buddies were considered the enemy? Vietnam was a war with no front lines, no demilitarized zones; it was an atmosphere that made such occurrences as My Lai all but inevitable. Are we to blame the pilots and the artillery officers, who would have been court marshaled had they refused orders under combat conditions? Are we to blame the generals and admirals who gave the pilots and artillery forces their orders? Or does the real blame for U.S. war crimes rest on the men in Washington who gave the generals their orders? They committed the greatest atrocity of all—those Lyndon Johnson, Dean Rusks, Robert McNamaras, McGeorge Bundys, who brought this country into the obscenity of Vietnam, who developed the policies and the use of the weapons that have destroyed Vietnam, that led inevitably to My Lai, that gave Cally and the other Callys the weapons and the opportunity to vent what was in them on the innocent, and who then sanctimoniously proclaimed their devotion to peace and liberty and freedom.

This was the doctrine that America ratified in Europe in 1945: that when a national at war engages in a systematic program of war crimes, it is not the technicians who actually pushed the buttons in Dochau and Auschwitz that hang, rather it is the major governmental officials who initiated the policy who are liable. This was the principle adopted by the allies when they sent the major Nazi governmental officials to the scaffold. It is interesting to note that one such official was Joachim Ribbentrop, Reich Minister for foreign affairs; his job description was remarkably similar to Rusk’s. Nowhere in the volumes of evidence presented against him (which may be found in the MWC Library) was it suggested that Ribbentrop himself ever physically killed another human being. Yet he was indicted, tried, convicted and executed for, among other things, conspiring in the planning of aerial bombing of England, complicity in the systematic mistreatment of American prisoners in the Battle of the Bulge, and his complicity in turning the Warsaw Ghetto into a “free fire zone.” Ribbentrop was “skeptical” about these policies, but not skeptical enough to try to stop them. The Nuremburg Tribunal is instructive: “On 18th October, 1942, Hitler issued the Commando Order…ordering the evacuation of all persons in Northern Norway and the burning of their houses so that they could not help the Russians…Ribbentrop testifies that he was strongly opposed on moral and legal grounds, but could not refuse to pass it on…there is little evidence that Ribbentrop was actively connected with the program, and he must have concentrated on his task of strategic planning.” Exchange the word “Vietnam” for “Northern Norway,” and “Vietcong” for “Russians” and you have the strategic Hamlet Program and the search and destroy mission. Are we to apply a different standard upon ourselves than we did on Germany? Robert Jackson, the chief prosecutors at Nuremburg, agreed that this would be the epitome of hypocracy: “If certain acts in violation of treaties are crimes, they are crimes whether the U.S. does them or whether Germany does them, and we are not prepared to lay down a rule of criminal conduct against other which we would be unwilling to invoke against ourselves.”

Of course, the implicit assumption here is that the Nuremburg concepts were valid, that “war crimes” do exist, that there exists at least a broad universal morality and code of conduct that transcends national boundaries. But a Machiavelian might argue that national self-interest is the only standard for judging foreign policy; such a person might argue that “was crimes” in Vietnam were justified because they were in the national interest. By this yardstick, rusk would not be guilty of war crimes and neither would Hitler, Himmler and Eichman. I would argue, however, that such crimes were not in America’s interest because they made it impossible for us to win the war. Vietnam was not so much a war of military objectives. It was essentially a struggle to win the “hearts and minds” of the Vietnamese people: an attempt to convince them to reject communism and embrace democracy. But one does not use napalm on villages and hamlets sheltering civilians caught between the government and the enemy if one is attempting to persuade those people of the rightness of one’s cause. One does not blast hamlets and their occupants with high explosives, defoliate a country and deform its people with chemicals if one is attempting to persuade them of the foe’s evil nature and one’s own morality. One does not declare where the people live (with nothing but a desire to be left alone) a “free fire zone” with anything and everything in it liable for destruction and death is one is attempting to persuade these people that one is fighting for their lives and liberties. If victory was defined as winning the “hearts and minds” of the people as Lyndon Johnson claimed, was this policy of atrocities the way to win? The only lasting peace we could have achieved in Vietnam was the peace of the graveyard. In the words of Tacitus in Life of Agricola, “they have made a desert, and have called it peace.” Was a desert worth 107,800,000,000 American taxpayer dollars, 303,475 Americans wounded and 55,000 Americans killed? Is this in our own “national interest?” 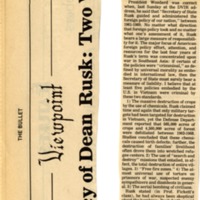 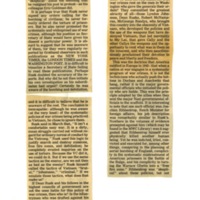