What is a Radical?

What is a Radical?

An opinion piece in the Mary Washington College student newspaper about the misuse of the word "radical" when used to describe political activism. Argues that while student activism is often looked down upon, it is an important part of the educational experience.

Edwin Newman, in his book Strictly Speaking, wrote that there are certain words and phrases in the English language which have been so misused and debased that their meaning has blurred to the point of uncomprehension. One such word is "radical," a word bantered about this campus with increasing frequency since the advent of Prometheus. But how many could, if questioned, really define the word?

I would like to suggest that when many people use the word "radical", they really mean to say "activist". This distinction is critical because one term denotes a particular political philosophy and one does not. A radical is one who is opposed to the present social system, believes that progressive change within that system is impossible, and that the present system must be torn down and replaced with another; or, as Webster puts it, "advocating extreme measures to retain or restore a political system." The key word here is "system", as opposed to particular policies advanced by components within that system. An "activist" on the other hand, is a person who believes in taking action against the things he opposes or in behalf of those he supports. He is different from the radical in that he supports the system and is willing to work within it to effect his changes.

Also, the term is apolitical; and activist is not necessarily a leftist; he can be a good Republican or Democrat, he may be a member of Right-to-Life or NORML. Phyllis Schafley is as much an activist as Julian Bond, Ronald Reagan as much as Cesar Chavez. Thus, this is not a call to radicalism. It is a call to activism.

Occasionally, student activism is reprehensible in its demands and objectives, such as the Filthy Speech Movement in Berkeley. But one idea is central to student activism: the belief that students have a right to participate in decisions which affect them. This concept is the core of the basic democratic ideal upon which our society is based: an active, informed citizenry is essential if democracy is to really work. When administrators tell students to shirk that responsibility and deny them a real voice in their destiny, or when students voluntarily forfeit it, this not only denies the democratic ideal, it undermines the idea of education itself.

Many educators tend to feel that students should be studying rather than demanding a say in their educational treatment. But campus activism is in itself an education. I have learned more about politics through NORML and the Student Lobby than I learned in the 18 hours of Political Science I have taken here, and my dealings with Joint Council gave me an education in law and justice more valuable than an entire curriculum or pre-law courses.

Studies are a student's primary responsibility, but philosophers from Socrates on have taught that the unexamined life is not worth living: that men have a moral right, an obligation to take part in the decisions that affect them. 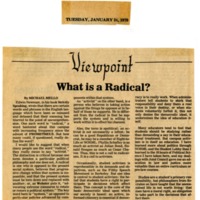