Free Speech: Defense of an Enemy

Free Speech: Defense of an Enemy

Newspaper article by Michael A. Mello which addresses the Constitutional problems of a legal case involving the prohibition of American Nazis from organizing a demonstration. Mello defends the American Nazis right to assemble under the First Amendment.

Free Speech: Defense of an Enemy
By: Michael Mello

There is presently a case being litigated in Illinois that has raised one of the most basic issues in America: the right of an unpopular group to express its’ views openly. The American Nazi Party has been denied permission to stage a peaceful march in the Chicago suburb of Skokie; the case is all the more explosive because Skokie’s population is heavily Jewish and a significant number of residents are survivors of Hitler’s extermination camps. As a Jew who lost two aunts in the camps of Nazi Germany, I can understand and sympathize with the residents of Skokie; as a Jew I am shocked and revolted that there are still Nazis in 1977; as a Jew I might want to prevent Nazis from having their parade. But I am not only a Jew: I am also a citizen of the United States of America, a nation which exists by virtue of a constitution and a bill of rights. And as an American citizen, I must respect the fact that all of my fellow citizens share the same rights that I do; including freedom of speech, expression and peaceful assembly. When any group’s liberty is abridged, no one’s freedoms are safe; as Thomas Paine wrote 200 years ago, :he that would make his own liberty secure must guard even his enemy from oppression, for if he violates this duty, he establishes a precedent that will reach to himself.”

As should already be clear, the purpose of this article is not to argue the validity of Nazism as a social or political philosophy. Rather, I wish to argue the right of every person — including Nazis — to be heard within the established framework of debate. Of course, the Constitution already provides for this in the First Amendment: “Congress shall make no law … abridging the freedom of speech, or the press; or the right of the people to peacefully assemble, and to petition the Government for a redress of grievances.” But this is an imperfect document (for example, it originally provided for slavery) and perhaps this concept of free expression is similarly invalid. So a defense of free speech is in order and in this defense I shall rely heavily on the philosophies of John Stuart Mill (as expressed in On Liberty) and Clarence Darrow (as expressed in his Autobiography.)

The first problem with the suppression of opinions is a very pragmatic one; who shall decide which points are to be permitted and which suppressed? This is no enigma when the concept involved is as apparently as fallacious as Nazism. But what of evolutionism, trade unionism, women’s and black’s rights, all of which were originally suppressed? How does one judge the truth of an opinion? There are no universal standards: it is not given to man to be certain of the truth. It was once universally accepted that women lacked the mental capabilities of men; Christians were thrown to lions; Galileo was persecuted; Socrates was killed. This is all to say that the opinion being suppressed is not necessarily wrong. The shining example of this is the ancient Greek philosopher Socrates, whose opinions so offended his contemporaries that he was put to death. Socrates was not killed by a lynch mob; he was condemned by a legal tribunal of his fellow citizens. Socrates, the wellspring of all subsequent teachers of virtue and ethical philosophy, from the lofty inspiration of Plato to the utilitarianism of Aristotle, was put to death for denying Gods recognized by his state and for “corrupting the youth” of Athens. This, the Master, the source of all eminent thinkers since born, was killed by this contemporaries for holding unpopular beliefs.

It is perhaps obvious that “valid” opinions such as those held by Socrates ought not be suppressed, but what if the opinion is wholly false, as those of the Nazis seem to be? To this I would answer that the truth is strong enough to withstand the challenge of falsehood in the marketplace of ideas. It is better to have ideas debated and dissected in the forum of free discussion that to drive them underground and five them the attraction of forbidden fruit. To deny one group’s right to express its opinion is to admit the doubts one may have about the validity of one’s own beliefs. Free discussion is a central theme of democracy.

Socrates and Hitler are extreme examples of truth and falsehood. But it is usually the case that an opinion contains some measure of both elements. It is only through the process of free debate that thrush has any chance of becoming known. Of course, it is not the passionate ideologue or dogmatist who benefits from the collision of opinions; rather, it is the “calmer and more disinterested bystander” who gains from free debate, for he is give the opportunity to listen to all arguments and make a personal decision.

It has been argued (by Samuel Johnson and Lord Devlin, among others) that the persecution of the giver of truth is a necessary test of his sincerity. Devlin believes that “in a democratic society…there will be a strong tendency to yield — not abandon all defenses so as to let in the horde, but to give ground to those who are prepared to fight for something they prize. To fight may be to suffer. A willingness to suffer is the most convincing proof of sincerity. Without law there would be no proof. The law is the anvil on which the hammer strikes.” The first problem with this position has to do with fairness; is it fair to treat the givers of new truths as criminals; must we expect such people to be martyrs as well as great thinkers? Beyond abstract fairness, there is a strong reason for rejecting Devlin’s view” he makes the implicit assumption that truth inevitably triumphs over persecution. Is this assumption necessarily true? Mill thinks not” “Persecution has always succeeded save where the heretics were too strong a party to be effectively persecuted. No reasonable person can doubt that Christianity might have been extirpated from the Roman Empire. It spread, and became predominant, because the persecutions were only occasional, lasting but a short time, and separated by long intervals of almost undisturbed propagandism.

“It is a piece of idle sentimentality that truth, merely as truth, has any inherent power denied to error of prevailing against the dungeon and the stake. Men are not more zealous for truth than they often are for error, and a sufficient application of legal penalties will generally succeed in stopping the propagation of either. The real advent age which truth has consists in the fact that when an opinion is true it may be extinguished once or twice or many times, but in the course of ages there will generally be found persons to rediscover it, until some one of its’ appearances falls on a time when from favorable circumstances it escapes persecution until has made such headway as to withstand all subsequent attempts to suppress it.” There is much support for this view in history, which is replete with examples of what we today call truth. Perhaps the best of these is the Protestant Reformation, which broke out and was successfully suppressed at least twenty times before Luther’s break with the established Church in the sixteenth century. There was Arnold of Brescia, Fra Dolcino Savoralrola, the Albigoeris, the Lollards, and the Hussites. As Mill put it, “History teems with instances of truth put down by persecution. If not suppressed forever, it may be thrown back for centuries.”

There are those who would press individual liberty for the sake of a strong state. To them I would resound that a state is worth no more than the aggregate worth of the individuals that compose it. The concluding words of Mill’s On Liberty contain a message that is particularly timely in the second half of the twentieth century, when the double threat of devastating war and revolution on a world scale makes it increasingly difficult to preserve a libertarian temper in politics: “a state which dwarfs its’ men in oder that they may be more docile instruments in its’ hands for beneficial purposes will find that with such small men no great things can really be accomplished; and that the perfection of machinery to which it has sacrificed everything will in the end avail it nothing, for want of the vital power which in order that the machine might work smoothly, it has preferred to banish.”

Which brings us back to the American Nazi Party and a simple economics cost-benefits analysis; the Nazis may be evil and their doctrines may be dangerous, but the suppression of their rights is even more dangerous to the basic tenets of democracy. The greatest harm of persecution is not done to those who are heretics, but rather to those who are not, because the mental development of the latter is stifled by the fear of being persecuted as a heretic. In an atmosphere of cowed conformity and slavish submission there may be a few exceptional great thinkers, but not an intellectually active people. We must keep the free marketplace of ideas open to everyone, for when we silence Nazis, it is but a small step until we persecute blacks or Jews; for the precedent has been established. This point was eloquently made by Martin Niemoeller, a Lutheran minister who was imprisoned in Theresienstadt concentration camp for his opposition to the government of Adolf Hitler. 76,000 people were murdered at Theresienstadt, including 15,000 children. When Niemoeller was liberated by the Allies in 1945, he was asked how the world let the actions of the Nazis take place. He responded, “In Germany,” the Nazis first came for the Communists, and I didn’t speak up because I wasn’t Communist. Then they came for the Jews, and I didn’t speak up because I wasn’t a Jew. Then they came for the trade unionists, and I didn’t speak up because I wasn’t a trade unionist. Then they came for the Catholics, and I didn’t stand up because I was a Protestant. Then they came for me, and by that time there was no one left to speak up for me." 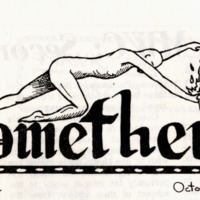 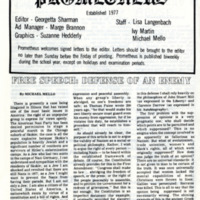 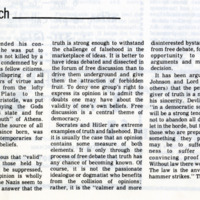 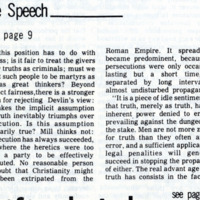 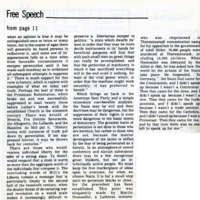