Describes the controversy surrounding Sun Myung Moon, the founder of the Unification Church.

For the past ten to twenty years there has been a constant rise in awareness of religious cults in the United States.

There are the Hare Krishna's, scientologists, Zen Buddhists, and many others. Yet one stands out as the largest and perhaps the most controversial-the members of the Unification Church, commonly referred to as "Moonies".

The Unification Church was founded by Sun Myung Moon. Moon claims that he decided to form the church after a vision of Jesus appeared to him on Easter morning, 1936, while meditating on a mountain. In the vision, Jesus told Moon to go forth and finish the job that he, Jesus, had started. From that point on, Moon worked at building his following to to what is now a membership of several million which spans the world.

The basic belief of the Unification Church is published in the Divine Principle, a book written by Moon. The Unification Church claims that there have been three stages in the history of human development, the first Adam, the second Adam, and the Lord of the Second Advent. The first Adam refers to the Adam of Genesis. Moon claims that the spiritual downfall of humanity was a result of Eve's having had sexual intercourse with Lucifer. Then, in an attempt to redeem herself with God, she had intercourse with Adam. This constituted the physical downfall of man.

The Second Adam, according to Moon was Jesus. Moon claims that Jesus was no more the son of God than the rest of humanity. However, he claims that Jesus was intuned to God and was aware of his desires. Jesus' mission was to complete the job Adam and Eve began, forming the kingdom of Heaven and Earth. Yet, before he could accomplish this, he was crucified.

Although the theology of Moon is controversial, it is more the method Moon uses to indoctrinate his members that invites criticism. They are first asked to attend a weekend retreat where they are bombarded with love, brotherhood, and teachings of the church. Constantly accompanied by dedicated believers, they are always kept busy and given little time to sleep. Afterwards, it is strongly suggested that they attend an intensified, week-long version of their initial experience.

The end of the second retreat leaves potential members exhausted and saturated with Moon's ideas. Many will become believers.

Once they join the church, there are a great many of demands placed on them by Moon (i.e. selling flowers, prosleytizing). They are expected to comply with all demands without question. In an interview with Time Magazine in June 1976, Moon stated, "I am a thinker, I am your brain when you join the effort with me you can do everything in utter obedience to me. Because what I am doing is not done at random, but what I am doing is under God's complaint". Another major area of controversy is the way in which children reject their parents once they join the movement. Moon, in the same Time article explained "You must start over again your new life, from that point denying your past families, friends, neighbors and relatives". Moon goes on to claim that he and his wife are the true parents of his followers.

Sun Myung Moon is indeed a very controversial man. Not only does he challenge the authoritative position of Jesus Christ but seems even to imply that he himself is a Divine Figure.

What is most interesting, however, is the nature of the prevailing arguments against Moon. The majority are concerned with Moon's indoctrination techniques and the power he wields over the lives of his followers. Few involve objections to his theological doctrines. 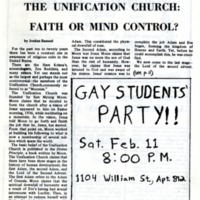 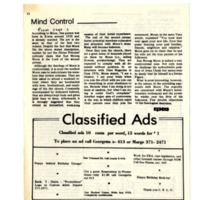