An article written for the Mary Washington Bullet by Cynthia Anderson detailing the toga party that was hosted by the "Animals."

In the tradition of National Lampoon's "Animal House," the "Hamsters" threw this fest in order to "let it all hangout." And it did. Prepster togas, adorned with alligators, striped belts, and topsiders were popular fashion items as well as the stranger concoctions: a space toga, which was adorned with a metallic cape and gloves, a prostitute toga with bangle and beads, a western toga topped with a cowboy hate and a striped tie businessman toga. Campus greenery such as ivy leaves, holly, and oak boughs graced the heads of many.

The people-to-beer ration was one gallon per person (none was wasted), which helped to get the festivities off to an uproarious start. By stamping, shouting, dancing, and just plain going crazy the crowd mad Thunderbay's last performance a memorable one. The band, consisting of ex-MWC men, found calming the clamor impossible.

Being scantly clad in a sheet seemed to break down the throng's inhibitions even more. AVC-TV was on hand to film such antics as line dancing, beer baths, and the acrobatics of flipping over while diving into a trash can. Perhaps there was a unifying philosophy behind partygoers motive while the rallying cheer echoed "TOGA, TOGA, TOGA..."

Speaking of philosophy, the festivities were visited by Dr. Van Stant, adorned in a "Fickett For Pro Counsul" toga, along with Ms. Hanna (in pink, complete with Cleopatra For Emperor-person buttons, of course.) Their wraps were awarded an honorable mention. Dr. Kramer also made an appearance.

The toga party is not unique to Mary Washington, however. The Washington Post ran a two-page article which explored this phenomenon and stated that there are actual "toga representatives" which go to college to promote the parties and in doing so, promote the movie.

TOGA '79, An "invitation only party," brought together just MWC students and their guests, which made the atmosphere familiar and the conditions less crowded, leaving plenty of room to pretzel. Patrick Everett, the Administrative Aide for the House, stated that the party was a success, and there is "a new theme trend in parties, exemplified by Madison's Pajama Keg Party in ACL Saturday night." It seemed as though the student body is looking for more creative names for the mundane title "keg party." The possibilities are endless. 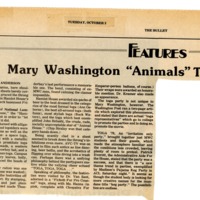