A newspaper article about black activist Stokely Carmichael who started a "people's revolution". Carmichael spoke to 1,000 people at Kent State University saying that capitalism is going away and that socialism is coming to America. He saw socialism as the means of gaining equality for everyone. He said that under capitalism, peace could not occur. He spoke about the student movement of the 1960s saying that capitalists wanted to disperse the movement's energies. The FBI ended the movement by making students turn to drugs and mysticism. He also said that when Africa is free that America will be free.

Speaking to about 1,000 persons at the Student Center Ballroom, a fiery Carmichael damned capitalism and predicted the inevitability of socialism in America. "Socialism is an economic system whose motive is not progress, but to serve humanity," Carmichael shouted.

The material manifestation of socialism, Carmichael pointed out, is that the people own the means of production.

The goal of socialism, as Carmichael sees it, is to achieve equality for all. "Capitalism is powerful, but it is no match for the people," Carmichael intoned.

Peace is impossible under capitalism, he said. "Capitalism reinforces the animal instincts of human beings and encourages the strong to devour the weak.

"Any conscious man or woman, who is strong, has a responsibility to help the weak become strong," Carmichael said.

He charged that capitalism utilized the negative aspects of Christianity to sell the message that human beings are basically evil and incapable of transforming themselves.

Speaking about the student movement in the 1960's, he said that the 'enemy,' which he called the capitalists, sought to disperse the energies of the movement.

"The FBI destroyed the movement by sending students down different paths like drugs, back to nature and mysticism," he said.

He advocated an African revolution movement within the U.S. black population. Tying them to their roots in the African continent, Carmichael said. "Only when Africa is free, will we be free. On the backs of Africans, capitalism has existed and sustained itself.

Stokely Carmichael, nationally known black activist, came to the student sit-in in Rockwell Hall Wednesday night after his scheduled speech to about 1,000 in the Student Center Ballroom. Carmichael told the students "to keep the fires burning to help the struggling masses of humanity." Carmichael spoke to the sit-in crowd only about five minutes before leaving. His talk was sponsored by the KSU Student Caucus, the student government, which...student money to pay...by Ernie Mastroianni. 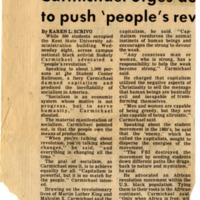 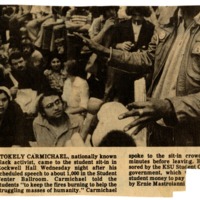