Much Accomplished, More to Do

Much Accomplished, More to Do

An article regarding a Student Bill of Rights that was created. It describes the problems with the Bill and the process by which it was created.

For the first time in Mary Washington College History, the student body here has a basic Bill of Rights: The Bill, a five-section Article within the Student Association Constitution, was overwhelmingly ratified in the campus-wide election last Tuesday. At last, we have a reasonably clear, lucid, and explicit statement of exactly what our rights are. The Constitutional Revision Committee, President Woodard, and the student body are to be commended. But the work must not stop here, for the Bill of Rights ratified last week is not perfect. While certainly a tremendous improvement in the SA Constitution, the Bill does have serious limitations which will hinder its effectiveness.

The most glaring problem is simply that the Bill is an Article in the SA Constitution. The SA Constitution applies only to the Student Association; it in no way constrains the Administration from ignoring the provisions of the Bill of Rights. The Bill represents progress: now at least the elements of the student government cannot constitutionally violate our fundamental rights. But often it is the Administration, rather than the SA, that encroaches on the rights of students, and here the Bill offers no protection. Some of the provisions in the Bill seem hardly to concern SA activities at all. How, for example, may Executive Cabinet, Senate, or Judicial Court “abridge the rights of students to freedom of religion … or peaceful assembly?” How often does the SA search dormitory rooms? These matters fall within the jurisdiction of the Administration, not the Student Association. Further, the clause in the Bill guaranteeing “due process” to students accused of judicial infractions only applies to student judicial trials; Dr. Woodard insisted that the crucial word “student” be inserted in the provision. Thus, the “due process’ clause does not apply where we perhaps need it the most—in Administrative Hearings.

The Section of the Bill pertaining to student clubs is worse than useless; it may even be detrimental. The Constitutional Revision Committee originally suggested that the provision should state that “organizations may be established for any legal purpose. Affiliation with an extramural organization shall not, in itself, disqualify the institution branch or chapter from institutional privileges.” But this was unacceptable to Dr. Woodard, and after discussion the Committee and the President agreed on the following: “Clubs may be established for any legal purpose consistent with the policy of the college. Any such organization shall not be denied membership into ICA, should it desire it, without justifiable reason.”

These two statements are radically different. One provides that students may form any legal organizations they want on campus; the other qualifies this by saying that now the club must be “consistent with the policy of the College.” In other words, clubs which the Board of Visitors, through Dr. Woodard, feels are “inconsistent with College policy” may not organize on campus even though their purpose may be perfectly legal and student interest in them great.

There are, of course, other limitations on the Bill of Rights. The right of “due process,” now guaranteed to students accused of judicial infractions, does not yet apply to Honor trials. (In fact, defendants in Honor trials do not even have the right to remain silent: the Handbook states that “the accused must answer all questions directed to him.”) Finally, there is no provision in the Bill guaranteeing that the rights of students shall not be denied on account of sexual preference. Having said all of that, one point must be re-emphasized: even with its limitations and ambiguities, the Student Bill of Rights represents progress. It represents progress because it is better than that which is replaces—a nebulous, undefined, generally-agreed-upon notion of what our rights were. Now we know. MAM 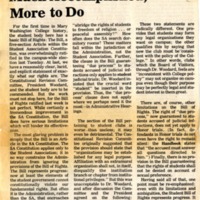