A newspaper article which states that according to a 1975 United States government study, about 30 million people have smoked marijuana. About 5,000 Virginians were arrested for smoking marijuana. The National Organization for the Reform of Marijuana Laws (NORML) is lobbying for decriminalization of marijuana. NORML has 15 members at Mary Washington College. Many people did not join because they were afraid they would get in trouble, not be able to graduate and that people would think they use marijuana. Their goal is to educate about marijuana. Mike Mello believes that the usage of marijuana should not be considered a criminal act. In Virginia, judges choose what the penalty is for users of marijuana. Mello said "while marijuana is not good for you, prison is worse."

By Georgetta Sharman Special to the Times

Fredericksburg- According to a 1975 U.S. government study, almost 30 million people in the United States have smoked marijuana. Of those 30 million, almost 5,000 Virginians were arrested and prosecuted under the current criminal law, costing Virginia taxpayers close to $6 million in law enforcement resources. The National Organization for the Reform of Marijuana Laws (NORML) is working to change this situation by lobbying for the decriminalization of marijuana.

The local chapter of NORML, based on Mary Washington College campus, was begun in the fall of 1976 and has approximately 15 regular members. And contrary to popular belief, according to president Mike Mello, the chapter is very conservative. "Most people think its the campus potheads who make up NORML," he said, "but they're the very ones who don't come because they're afraid they'll be discovered. A lot of people in NORML don't smoke marijuana."

Still, most students are afraid to join NORML. One of the editors of last year's "Bullet," the campus newspaper, started what Mello termed a "wave of paranoia." "She had people believing they would get into some kind of trouble if they joined NORML," he said. Their common apprehension is that the administration would put their names on a "hate list" and keep them from getting into graduate schools or good jobs. Some are nervous about belonging to a "radical" organization or being thought a "pothead."

In reality, however, the administration of the college has been no problem. "They bent over backward to let me start a chapter on this campus," said Mello. There are also several faculty advisors for the group.

Most of NORML's activities center around education the campus and community about marijuana. During the 1976-77 academic year, NORML sponsored two speakers, John K. Zwerling, the Virginia state coordinator, and R. Keith Stroup, a member of NORML's board of directors; held a concert and bake sale to raise money; and showed two films. Money raised by the concert and bake sales goes into the defense fund. Similar activities are planned for this year. Mello also hopes the group can start a library about marijuana, both pro and con, that will be open to the public. A public debate on the legal, medical, and social aspects of pot is also being planned.

Mello, though not a pot smoker when he started NORML last year, believes firmly that marijuana should be decriminalized. "I became interested in NORML for the same reason whites marched with blacks during Civil Rights ane straights supported gays against Anita Bryant," he explained. "The rationale behind the marijuana laws has been discredited; they're an anachoronism. Other anachronistic laws, like running 20 feet in front of a car with a red warning light, are no longer applied, but people are still going to jail for pot. And recent surveys show 86 per cent of the people are pro-decriminalization."

Decriminalization would remove criminal penalties for the possession and use of small amounts of marijuana. Current state laws define possession as a misdemeanor, punishable by one year in jail, a $1,000 fine, or both; possession of larger amounts, termed "possession with intent to distribute," carries a fine of $25,000 or a jail term of 5 to 40 years, or both. While most states set one ounce as the dividing line between use and distribution, Virginia has no such guidelines. The penalty is left totally in the hands of the judge. Therefore, theoretically, it is possible to receive the maximum penalty for the possession of one joint, a marijuana cigarette, which contains less than one ounce of pot. Eight states have already decriminalized pot, substituting a citation-enforced fine, much like a traffic ticket, for the criminal penalties. President Carter's recent endorsement of decriminalization gives the issue more "respectability" according to Mello.

Current laws and attitudes toward Marijuana were formed in the 1930's by such films as "Reefer Madness" and "Marijuana-Assassin of Youth", both of which were shown last year at MWC. The latter film was part of a 1936 campaign to have marijuana outlawed in the U.S. It presented fictionalized case histories in which pot, in and of itself, led men to, in Mello's words, "rape, pillage, and kill", the film also implied that pot was directly linked to organized crime.

NORML does not advocate the use of marijuana or any other drug. It does feel however, that current penalties far outweigh the seriousness of the offense. Mello stated the MWC chapter's attitude very simply--"While marijuana is not good for you, prison is worse." 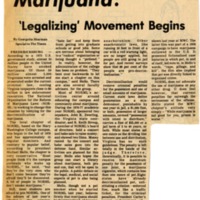 Marijuana, Mary Washington College, The National Organization for the Reform of Marijuana Laws