With new evidence, a man on death row may be released. He was convicted of the murder and rape of two women, confessed, and has withdrawn his confession to pursue his innocence.

BOYDTON, Va. – Small wonder that Joseph M. Giarrantano was feeling depressed. He had just spent another sleepless night on death row composing the arguments that he hoped would keep him from the electric chair.

With his last appeal coming up before the U.S. Supreme Court, Giarratano, 33, a convicted murderer and legal scholar whose case has become and international causee celebre, is increasingly haunted by his impending execution.

“It’s not so much that I’m scared to die,” Giarratano said as he sat handcuffed in a visiting cell at the Mecklenburg Correctional Center last week. “But the whole death ritual – of being moved into this cell, strapped into a chair, and fried to death – that’s frightening, and I don’t know how I’m going to deal with that.”

Two factors make Giarratano’s case unusual. The first is the former junkie’s transformation into a respected jailhouse lawyer who has won important prisoners’ rights cases and serves as a consultant to lawyers in capital cases nationwide.

The second is the discovery of evidence that casts doubt on Giarratano’s guilt in the murder of a 44-year-old Norfolk woman and the rape and murder of her 15-year-old daughter – evidence the courts have declined to consider because of procedural technicalities.

The result, Giarratano’s supporters fear, is that a possibly innocent man – whose rehabilitation is virtually unquestioned – may be put to death.

“It would be an extraordinary tragedy, really just an incredible loss – personally to me, but really to the legal community and to Virginia,” said Michael A. Mello, an assistant professor at Vermont Law School in South Royalton, Vt.

“Joe is a person who has made one of the most remarkable metamorphoses of any person I have ever known,” said Richard H. Burr 3d of the NAACP Legal Defense and Education Fund, one of Giarratano’s lawyers. “I don’t know of another case that has gone to the Supreme Court that presents more serious questions about innocence.”

But Bert L. Rohrer, a spokesperson for Virginia Attorney General Mary Sue Terry, who has successfully opposed Giarratano’s bid for a new trial, said last week that rehabilitation was “really not an issue to us.”

“We have taken the position… that there is no new evidence,” only “old evidence in new wrapping,” he said.

Giarratano, a sometime scallopboat worker who says he spent years in a cocaine- and Dilaudad-inducaed haze, fled to Florida and turned himself in to Jacksonville police in 1979. He said he had found Barbara Kline, known as Toni, and her daughter, Michelle, dead in the apartment that he shared with them and believed he had committed the murders.

Giarratano gave police five conflicting confessions and turned down an offer of a life sentence in return for a guilty plea because he felt he deserved to be executed.

Despite a suicide attempt, he was judged competent to stand trial, convicted and sentenced to death after a morning long, non-jury trial.

Giarratano, who was given the powerful tranquilizer Thorazine by prison authorities, said he had little will to live and kept dropping his appeals.

In 1983, tormented by voices in his head, he let himself come within 24 hours of being electrocuted. “I had just given up completely. [I believed] I was rotten, evil, sick individual, and I deserved to die,” he said. “What I didn’t count on happening was Marie Deans.”

Deans, now executive director of Virginia Coalition on Jails and Prisons, which provides legal assistance to indigent inmates, told Giarratano that his life “was worth living, that I was worth something,” he said. “That’s something I had never heard from anybody.”

As Deans gained his trust, he revealed horrific details of his childhood in Jacksonville.

“Both myself and my sister were sexually abused by my stepfather. Both of us were physically abused by my mother,” Giarratano said last week. “And the abuse was rough – she would use things like cattle prods. I got the hell beat out of me with a steel-handled broom for buying the wrong brand of potato chips.”

By age 11, he had begun a descent into alcohol and drug addition. He quit school in the eight or ninth grade. At 15, after slashing his wrists and attempting a drug overdose, her was hospitalized, he said.

At 17, to punish him for escaping from reform school, Giarratano was sent to prison, where he had a brief encounter – with his natural father, also a junkie. His father offered to help him obtain more drugs, he said.

By 21, he was in Virginia, living with the Klines. One day, he awoke in the apartment and went to the bathroom. “And that’s when I saw them – Toni laying in the bathroom. There was just blood splattered everywhere,” he said.

Giarratano says he has never had any memory of killing the Klines. Nor did he have a motive. But, believing he must have been the perpetrator, he made up the confessions and managed to convince the authorities of his guilt, he said.

With conseling and encouragement from Deans, Giarratano has come into his own as a person and as a legal scholar.

In Giarratano v. Bass, he obtained for prisoners the right to confidential communications with their lawyers and paralegals. In Murray v. Giarratano, he won a decision guaranteeing inmates the right to counsel after their first round of appeals. The ruling was struck down last year by the U.S. Supreme Court, 5-4.

But it was not until last year that Giarratano became convinced of his innocence in the Kline murders.

Deans, with the backing of a German art gallery owner who had heard of the case, had hired an investigator to explore Giarratano’s past. The investigator returned with doubts about his guilt.

Now, Giarratano and his attorneys argue that physical evidence on the scene – bloody footprints, unidentified pubic hairs, fingerprints – points away from Giarratano. They say Michelle Kline was strangled by a right-handed person, while Giarratano is left-handed.

At the very least, they argue, Giarratano was incompetent to stant trial. And they say they have unearthed a more likely suspect – a boyfriend of Barbara Kline’s with a felony record that includes sexual violence against women.

So far, however, the authorities have declined to pursue the matter.

“I didn’t want to hear anything about innocence,” said Giarratano. “Now, it seems like all of this has been a lie….It’s all premised on my accepting responsibility for something I didn’t do.”

Still, Giarratano is facing death – as early as June, he says, unless the Supreme Court orders a new trial or Virginia Gov. L. Douglas Wilder, a one-time death penalty opponent, commutes his sentence.

Meanwhile, Amnesty International has taken up his case. And ever since 1986 British television documentary featuring him, Giarratano has received increasing press attention – first in Europe, then in the U.S. media, and, finally in Virginia, where editorialists across the state are calling for a new trial.

Lawrence C. Lawless, who prosecuted Giarratano, remains convinced of his guilt. “If they needed a volunteer to push the button, I’d do it off-duty on the weekend,” he has told Richmond Times-Dispatch.

With his final appeal brief due April 24, Giarratano said he was almost afraid the think of a life outside of prison, which might include law school and a career as public-interest lawyer.

“I was doing better,” he said. “Now, I’m really feeling the pressure.” 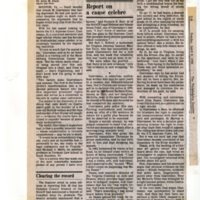 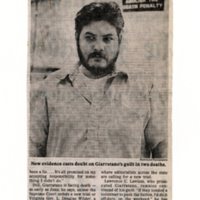