The Impact on Due Process

The Impact on Due Process

BULLET New Analysis of the Anne Kight controversy in the Spring Semester of 1978. The article is primarily concerned with the idea of campus "due process", and the enumeration of rights, as well as the problem of "overzealous" dormitory officials that violate the THE HANDBOOK.

The verdict in the Anne Kight judicial case brings to the Mary Washington College judicial system a principle that has long been at the core of the federal court system: the principle that violations of the rights of students accused of judicial offenses, the violation of "due process," is in itself grounds for the invalidation of an entire case. Anne Kight was guilty; she did violate the visitation regulations. But because she was not read her right prior to the questioning, as is required by the Student Handbook, she received no penalty for her offense. In the words of the court, "we find you unanimously guilty of a visitation violation; however, we are dismissing the charges on the ground that you were not advised of your rights."

The impact of this case on Mary Washington College is impossible to determine. Since the College judicial system does not employ the concept of precedents in its handling of individual court trials, the Kight decision can hardly be seen as setting a legal precedent. However, this decision certainly does establish a de facto precedent and may pave the way to making the "rights of the accused" a reality at Mary Washington College.

This case brings the MWC judicial system more in line with the federal system. Both systems demand trial by peers; both have extensive appeals procedures. But most importantly, both have the power to impose serious penalties. When errors in procedure (such as occurred in this case) occur in federal court, the case against the defendant is invalidated. When a prisoner is not read his rights, the case is thrown out of court; when evidence is obtained illegally, the case is thrown out of court. The reason for this is simple: it is the only way to guarantee that the rights of the accused are protected throughout the critical initial stages of the judicial process. Anne Kight summed it up: "there is only one remedy to deter future violations of The Handbook directions by dormitory officials. Only by throwing these cases out of court can this court impress upon careless of overzealous dormitory officials that violation of The Handbook will do them no good. If the officials are made aware that failure to observe Handbook requirements will result in the voiding of the entire case, they will take those requirements much more seriously than they did in this investigation." This perhaps will be the over-riding significance of the Kight decision: no the rights of the accused must be observed.

This decision must not be interpreted as any kind of license to commit visitation violations. On the contrary, it must be remembered that Kight was found guilty, though the sentence was suspended. The decision is directed more towards judicial officials than towards individual offenders. The message to offenders is as clear as ever: you will be caught, tried and punished. But now the message to dormitory officials is equally clear: you have an important responsibility, and you must fulfill it.

The Kight decision had defined "due process." Defendants in judicial trials are guaranteed "due process" by the SA Constitution, by the Student Bill of Rights, and by the Statement of Rights and Responsibility of Members of the College Community. A precise definition of "due process" is difficult; the Supreme Court Justice Moody once wrote that the phrase is "elusive of exact comprehension." But the Court apparently agreed with the defense that "certainly it requires, as an absolute minimum, that the established investigative and judicial safeguards than guarantee our fundamental liberties must not be abridged by over-zealous law enforcement officers." Due process is precisely that: a guarantee that the duley established judicial procedures must be followed. 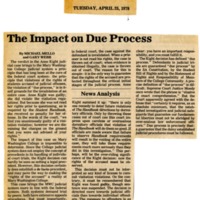